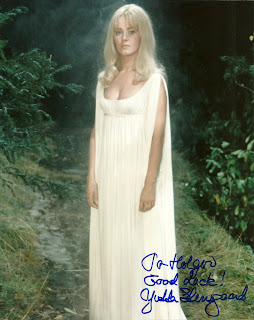 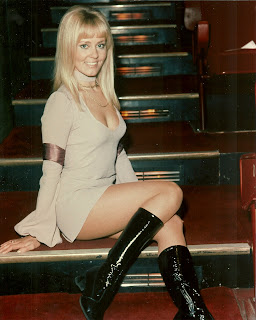 After being MIA for a considerable numbers of years, Stensgaard was rediscovered by chance in 1988 in Los Angeles when she walked into (Little Shoppe of Horrors correspondent’s) Gary Smith’s travel agency. She initially was very uncomfortable combining her previous modelling career and nude shots with her strong Christian beliefs and refused to talk about her past life. Lately, however, she appears to have been more relaxed about it and even started attending conventions where she is surrounded by fans grateful to discover the re-appearance of one of Hammer’s most seminal Glamour Starlets.
Posted by Holger Haase at 1:37 PM

Great biographical piece. I grew up staring at the blood-soaked Lust for Vampire shot, wondering what the heck was going on and could I really see her nipples. It is great to get to know a bit about the actress and her personal life.

I am over-joyed to hear she has become a Christian. Thank you for sharing this with us.

Tim Lucas' Video Watchdog did an excellent interview with her in March 2005 issue 117! A must read for all fans!
http://www.videowatchdog.com/home/HTM/117.htm

Thanks Mirko, for your kind words about my VW-interview with Jytte Stensgaard! It took me several years to track her down, but it was worth it. You might also want to read Tim Greaves' fanzine publications "Yutte Stensgaard: A Pictorial Souvenir" (1992) and "Yutte Stensgaard: Memories of a Vampire" (1993).