Caroline Munro On the Buses

I had only ever watched Mutiny on the Buses and given that this comedy trilogy was Hammer's financially most profitable venture – Did someone say they didn't successfully try new ways in the 1970s? - was always somewhat ashamed that I had missed out on watching all three productions so when I discovered a cheapo set of those flicks in town (a steal at just €2.50) I had to splash out and dedicate the weekend to a journey back into a time when birds were crumpet and men were henpicked.

Well, what can I say? If you can stomach this kind of comedy these movies aren't all that bad. They sure aren't the worst of their kind but I wouldn't exactly call them examples of comical genius either.

What fascinated me most of all, however, was finally being able to see Caroline Munro's first appearance in a Hammer movie.

Hang on, I hear you say. Wasn't her first role in Dracula A.D. 1972 to be followed by the seminal Captain Kronos, Vampire Hunter?

Sure.... Legend has it that James Carreras discovered her on one of her Lamb's Navy Rum billboards and straight away decided to offer her a contract.

Just where, however, did he see her billboard? Could it have been here? 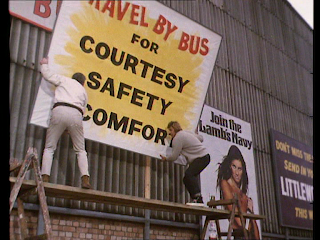 Yes, watch the original On the Buses and you can clearly spot her a couple of times on a giant billboard right next to the bus depot. 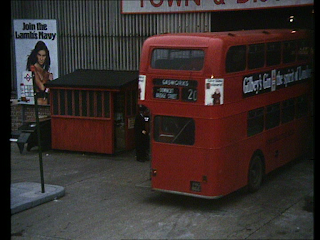 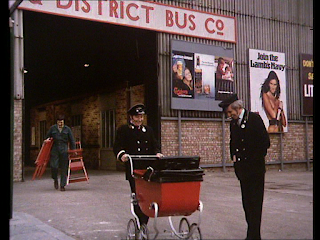 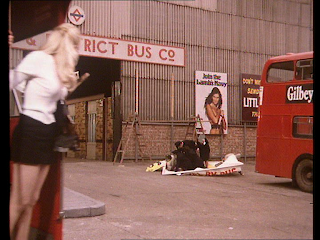 So unless someone supplies me with evidence to the contrary I will remain convinced that constant exposure to her image during the filming of this comedy left him unable to resist her charms and compelled him to cast her in somewhat meatier roles and Hammer history was made.

Don't bother looking for her in Mutiny and Holiday on the Buses. By the time these were shot, her billboard had already been replaced.
Posted by Holger Haase at 9:15 PM

Email ThisBlogThis!Share to TwitterShare to FacebookShare to Pinterest
Labels: Caroline Munro, On the Buses, Reviews (Hammer)

Hey Holger, you are so lucky to find the disc for that money! On Amazon UK the asking price is enormous which I find a pity because those movies I am looking for since ages to complete my entire Hammer collection! Sigh! I'll have to wait for another cheapo!!!

I know: I checked them out on Amazon after I bought the disc. The prices are ridiculous. Emphasis on *asking* price as I don't think anyone will take them for that amount. LOL

Are you saying you need them, Mirko? Cause when I got them two or three weeks ago they had some more of those in the shop. I could check again but no promises that they're still around.