How to say “De curse of de hound is on you!” in Italian… 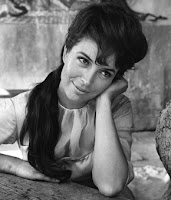 Okay, so now I've seen The Old Dark House (thanks, Holger!) and Shadow of the Cat (thanks again, Holger!) it really feels like I'm starting to get somewhere filling the gaps in my Hammer education.
I've also been dipping my first nervous toe into the waters of New Hammer, emboldened by the rather good trailers for The Woman In Black.
I'd been intending to post about all of these things, but the fact is I've also just seen Star Crash for the first time (damn you, Holger!!!) and I'm still recovering. My wife is feeding me hot soup and mopping my brow, and I'm wondering what I did with myself during the 38 years I spent before getting round to seeing it.
Someone remind me: what was the point of all those films that don't have Caroline in that outfit in them, again? This, surely, is what the movies are all about. 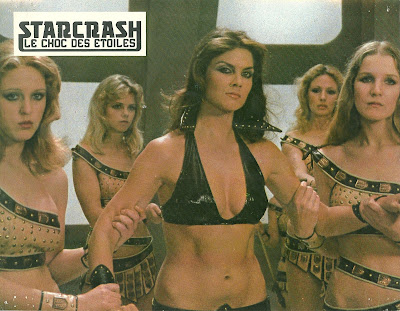 I once went to a film memorabilia fair where Caroline was appearing, but found myself - uncharacteristically, I must say - too nervous to approach her. Had I seen Star Crash at that time, I probably wouldn't have even had the courage to enter the building.

Anyway, while I'm still pondering the merits of The Old Dark House and The Resident, here is a little something that recently caught my eye. 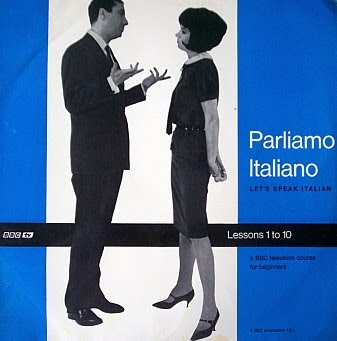 I've known this picture all my life; for some reason my father possessed a set of the books, which were designed to accompany a BBC tv series on learning Italian. But the book gives no indication of who the sharp-looking cappuccino drinking girl is on the cover, and I never realised until I recently picked up second hand copies of the tie-in LP records.
As you probably know, it's Marla Landi, known best to we as the Spanish hellcat loose on Dartmoor in The Hound of the Baskervilles but in reality, of course, an Italian. Marla presented the series, but sadly, hers is not one of the female voices on the LP, so I still don't know what she sounds like in her native tongue. And one (but only one, oddly) of the three LP covers misnames her as 'Maria'. But she looks fabulous in her coffee bar clobber. I love the barnet, and the pointy shoes.
Now I just need to see her hosting Play School...
Posted by Matthew Coniam at 9:10 AM

Haha, glad I could be of assistance. And even gladder to see you enjoyed Starcrash so much. There are moments when I fear that the only reason I love that film so much is because I first saw it at such an impressionable age and it messed up my life in so many ways from them on but nice to see that there are grown men out there who also "get it" after seeing it for the first time and that it is *not* just nostalgia talking.

Can't wait to read what you have to say about New Hammer. Should be interesting.

And - wow!!! - what a find. I really am amazed where traces of the Hammer Ladies can often be found. One day years ago I went to a Second Book Store and in the corner of an eye sotted a 70s paperback (Alexander Fullerton: THE ESCAPIST) with none other than Caroline Munro on the cover. I could have sworn I scanned it years ago but can't find any trace of it online anymore.

Following the discovery I wrote to Caroline and she confirmed that it was really her and that she had done photo shoots for a number of paperbacks then.... but couldn't remember for what titles. Am anxiously scanning the book shelves since.

Oh, did I mention I once had lunch with Caroline. ;-)