The ever-changing faces of Victoria Vetri

Or should I call this: The ever-changing hairstyles of Victoria Vetri?

Either way, I just happened to come across two of Vetri’s TV appearances this weekend:

THE MAN FROM U.N.C.L.E.’s The Indian Affairs Affair still features her under her alternative nom-de-plume Angela Dorian.

The episode is the series’ Season Two finale and with its exaggerated “Cowboys’n’Inchuns”-imagery already gives a taster for the campy madness that was to follow in the subsequent season.

All of the Native Americans on display may be American but they’re hardly native. Even Illya Kuryakin joins in and dons a dark wig and a fake accent.

Dorian/Vetri plays Charisma Highcloud, the daughter of an Indian Chief (played by familiar in face if not in name, Ted de Corsia) held captive by Indian hating L.C. Carson who intends to drop a hydrogen bomb and apparently needs the Indian’s reservation for his schemes. (Don’t ask.)

Seriously, whatever happened to the hydrogen bomb? Isn’t it time we get a decent hydrogen threat again? Atomic warfare is so lame in comparison!

Much to her father’s annoyance, Vetri’s character sustains her student’s lifestyle by becoming a Native go-go dancer in New York. 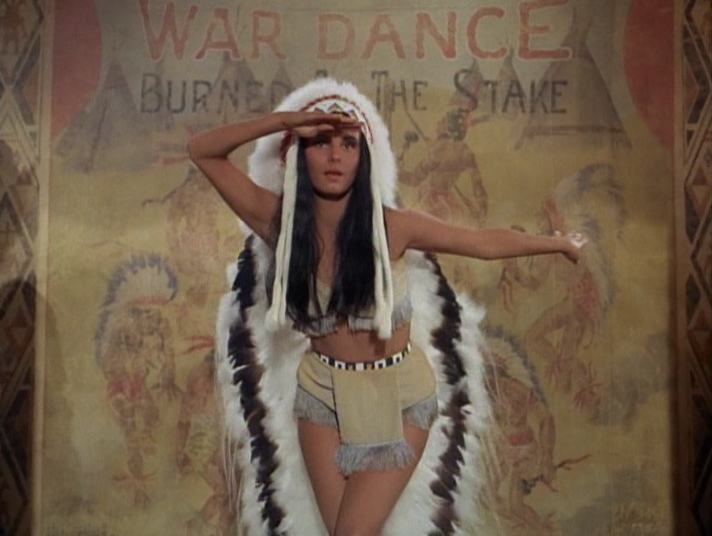 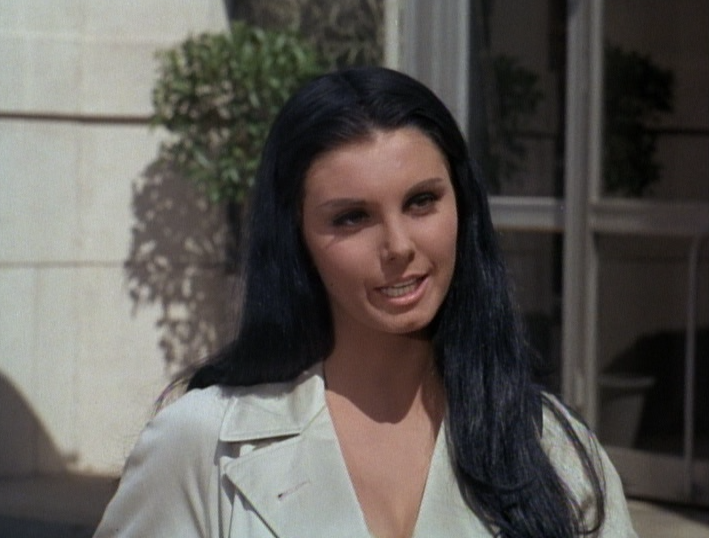 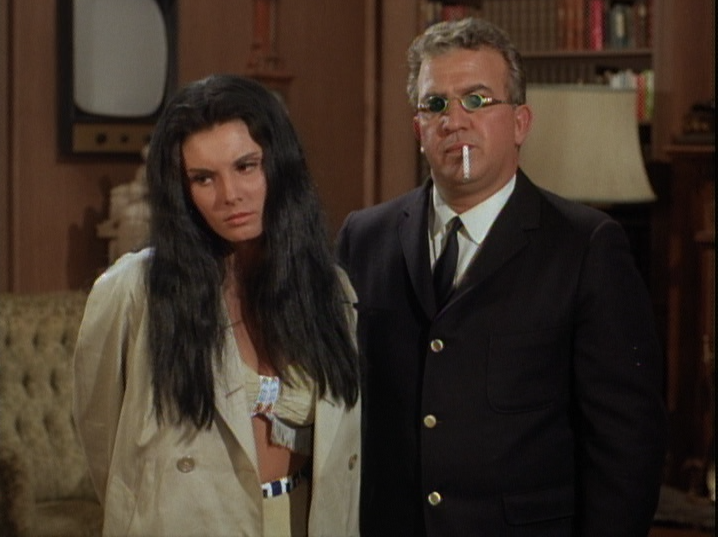 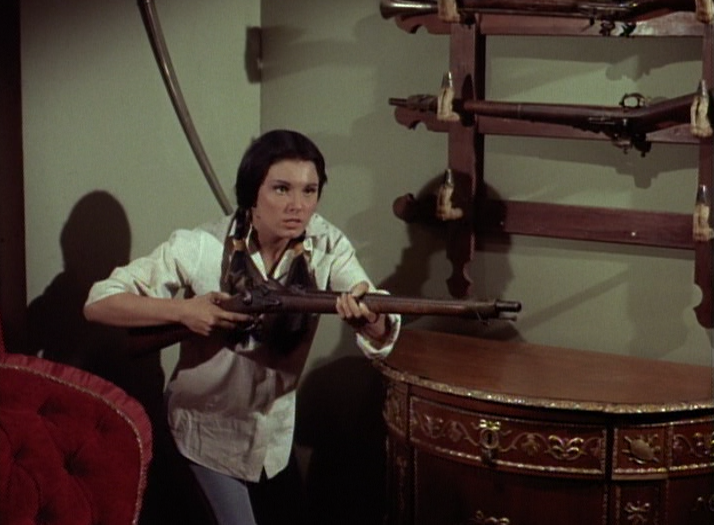 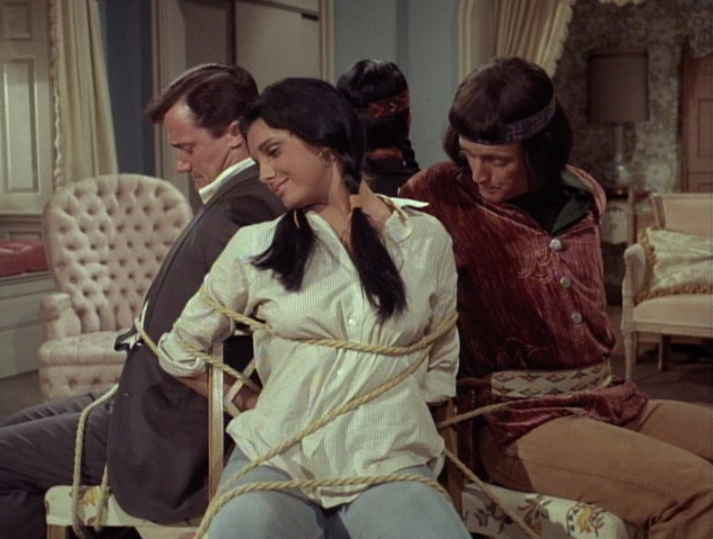 For MISSION IMPOSSIBLE’s Squeeze Play she is back again to her more paler real self. This Season 5 episode is one of the shows with Leonard Nimoy and Leslie Warren in its line-up, both of which also have prominent roles infiltrating the hide-out of a dying Mafia don (Albert Paulsen, who had previously also appeared in a variety of other roles for MISSION IMPOSSIBLE) with the intention of obtaining his secret list of heroin distributors and causing an internal struggle in its ranks.

Vetri again plays a “Chief’s” younger family member, this time the grand-daughter who is pretty much innocent but has inklings of the nefarious activities of all those sharp-suited men in sunglasses around her. 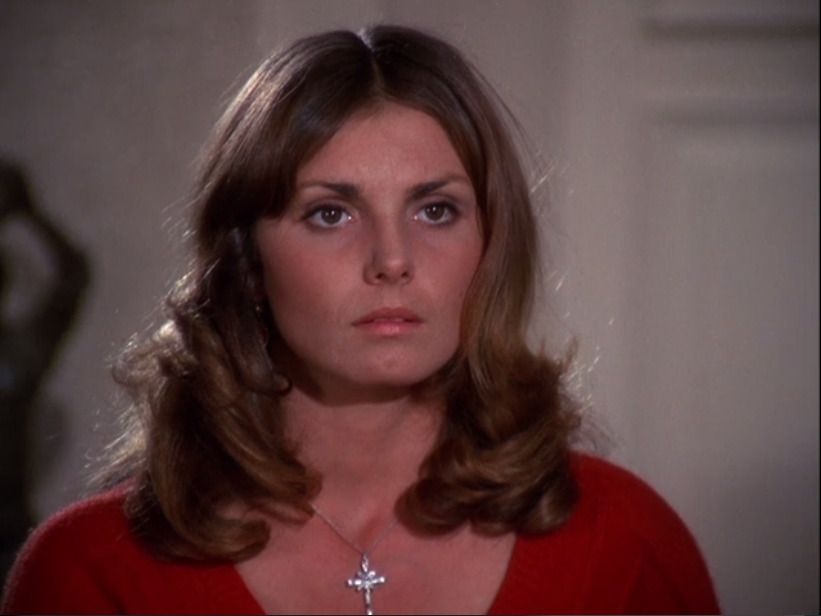 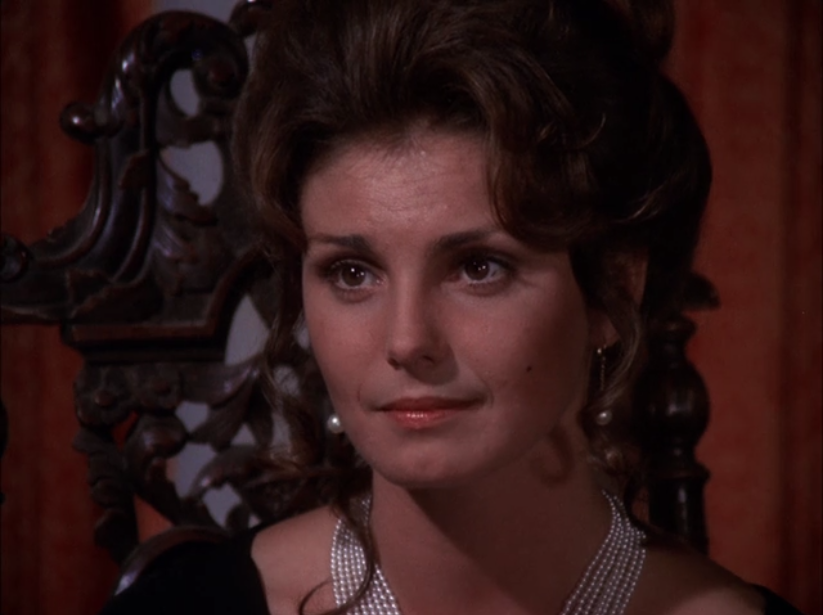 Truth be told if the mention of “Angela Dorian” hadn’t triggered something in my memory I may never have connected her with the blonde-haired bewigged cavegirl of Hammer’s WHEN DINOAURS RULED THE EARTH. Strange that someone who has become something of an iconic figure in Hammer Fandom, should ultimately be so unrecognizable in most of her other performances but such is the fate of Brunettes who briefly become famous as Blonde Bombshells.

The MISSION IMPOSSIBLE episode is currently available on YouTube or Netflix US. THE MAN FROM U.N.C.L.E. may be on YouTube for some…. but not for my region. I watched this courtesy of my fab U.N.C.L.E. box set.

Now I better be off trying to come across some more of Vetri’s TV work. It seems that due to her looks she was often hired for more “ethnic” roles and therefore featured in a number of Western series as well, not just 1960s Spy shows.

If you're interested in a little more info on Victoria's B movie career: