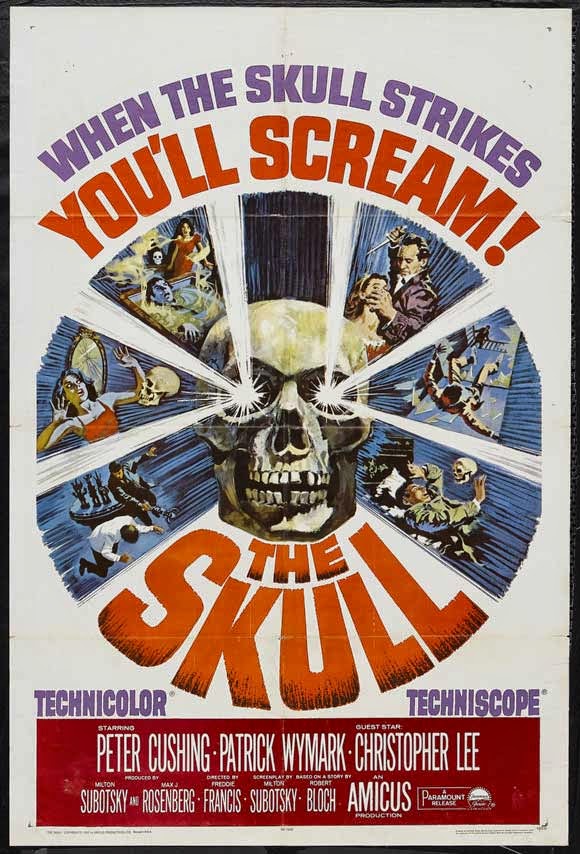 “Christopher Maitland sat back in his chair before the fireplace and fondled the binding of an old book. His thin face, modelled by the flickering firelight, bore a characteristic expression of scholarly preoccupation.

Maitland’s intellectual curiosity was focussed on the volume in his hands. Briefly, he was wondering if the human skin binding this book came from a man, a woman, or a child.


The Skull is one Amicus’ first horror films. Coming hot on the heals of their first portmanteau flick, Dr. Terror’s House of Horrors, this is actually a feature length movie though ironically based on a short story, The Skull of the Marquis de Sade, by Robert Bloch, i.e. the kind of material that they would later typically use for the anthology productions.

Horror films about obsessive collectors are a fascinating sub-genre that have very rarely been explored outside of Amicus where Robert Bloch appears to have been the driving force behind that niche (see also “The Man Who Collected Poe” segment of Torture Garden).

For The Skull Milton Subotsky co-adapted Bloch’s screenplay about an esoteric collector (Peter Cushing) who starts a descent into murder and madness when he is being offered the genuine skull of the Marquis De Sade.

Though the movie by and large follows the general plot of the short story to the point where certain lines of dialogue are even lifted verbatim, given the requirements of a feature length production there are added sections that are virtually dialogue free in which the film truly shines.

For these scenes director Freddie Francis managed to create some memorable bravura images that clearly demonstrate the cinematographic skill that would ultimately lead to him winning an Oscar. (Official Director of Photography here was John Wilcox.) 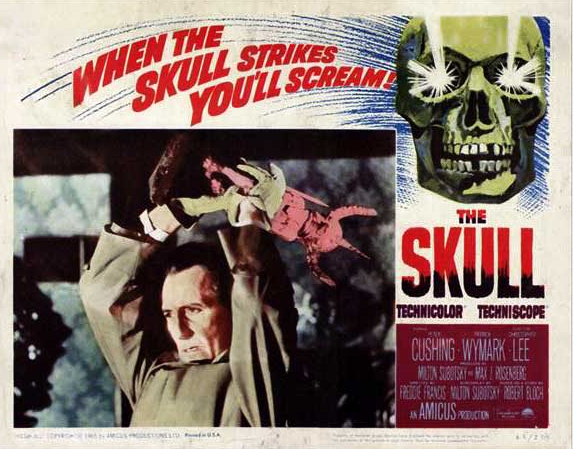 A Gothic pre-credits scene is bathed in a very Bavaesque light and depictures a silent, moody grave robbing. At one stage everything is filmed from the point-of-view of the corpse. It appears as if the corpse was lying in a glass tomb and could look through it to see the dirt removed from the coffin.

The film has lots of those strange angles and we often get to see everything from the perspective of the skull, a type of imagery that Alfred Vohrer was also very fond of in German Edgar Wallace Krimis at the time.

Long periods without sound or talk other than musical cues and purely visual imagery dominate this production that is also chock-a-block with little unnerving details such as somewhat distorted mirror reflections or bizarre camera angles.

The most famous of these scenes is midway through and could have been taken straight out of TV’s AVENGERS series: Maitland appears to get arrested and is brought to a Kafkaesque location, a large but mainly empty room only presided over by a judge surrounded by demonic statuettes who communicates through mute sign language and forces him to play a game of Russian Roulette, probably the most drawn out one prior to Deer Hunter. Maitland afterwards escapes through a maze of red corridors, and is threatened by gas and crushing walls while the skull is seen floating through the air. It’s a wonderfully filmed surreal nightmarish vision that vastly improves on the short story’s equivalent which features a rather more conventional form of torture by Iron Maiden.

The visual opulence of this production is furthermore highlighted by some of the most stunning set designs to be found in a 1960s horror production (courtesy of Scott Slimon and Bill Constable).

The characters all live in individually styled surroundings emphasizing their various collecting interests: Maitland’s library; an opulent billiard room with tribal masks; a phrenologist’s apartment featuring a range of masks and dragons as well as lots of books, crystal balls and skulls; the paintings in the shady dealer’s room.

According to Deborah DelVecchio and Tom Johnson in Peter Cushing: The Gentle Man of Horror and his 91 Films all this was filmed in Shepperton Studios “on one composite set which consisted of five rooms and a hallway”.

The Skull is probably the closest we have to a Cushing/Lee-Team-Up in which Peter Cushing plays a Baddy against Christopher Lee’s Good Guy though Cushing’s character is never inherently evil just involuntarily under an evil influence. (And Lee is not really a Goody, just scared and not-evil.) In actual fact the film ramps up the body-count in comparison to the original short story where there were decidedly less killings and none of which were cause by Maitland. 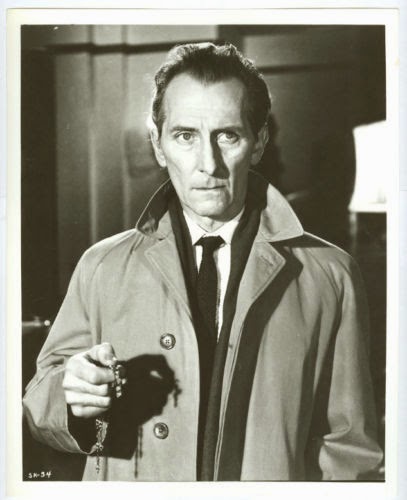 The film is a major tour-de-force for Cushing who features in the vast majority of the scenes and often is required to silently act within the confines of a dialogue-free atmospheric scenery.

The only other two actors in this production with any decent screen-time to speak off are Patrick Wymark as a wonderfully sleazy procurator of artefacts and Christopher Lee as a friend and fellow-collector who first of all gets embroiled in a bidding war over some demonic figurines and afterwards wants nothing more to do with them. It’s rare that we ever hear fear in Lee’s voice but this is one of the few occasions where he is made to portray a man at the end of his tethers.

Also watch out for Michael Gough as an auctioneer and Patrick Magee and Nigel Green as a coroner and police officer, all three in tiny blink-or-you-miss-them short appearances that beg the question why so many reasonably well known actors at the time constantly show up in what amount to little more than extra parts at that stage in their careers.

All in all, The Skull is one of Amicus’ best productions if not even THE best. Though the studio is mainly known for their portmanteau movies, it required a feature length adaptation of a short story to help them properly unleash a highly atmospheric feast. Some may consider this to be a bit short on actual horror but for me this is one of the most intriguing visual treats the studio had to offer.

I have really enjoyed reading the blogposts on Hammer films, thank you.