Sinclair McKay: A Thing of Unspeakable Horror – A History of Hammer Films 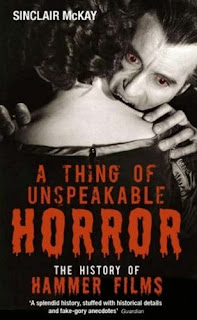 I had this book lying around unread for far too long. After seeing the general slating this work got in the Hammer community when it first came out, I never bought the initial release and only picked it up when it became available as a relatively inexpensive paperback. Then put it aside and never looked at it again until now.

I know of at least one person who said that they gave up reading it when they discovered that they knew more about the subject at hand than its author so I was more than just a little wary of finally approaching this relatively straight forward history of Hammer horror. The author as expected does indeed focus primarily on Hammer's Gothics though he also briefly touches some of their other movies and also attempts to put them into a wider context with the British film industry at the time.

To cut to the chase: No, you're not going to discover anything new in this book that hasn't previously been written about the company. In actual fact one of the surprises is how little McKay seems to have bothered with proper research. Dick Klemensen mentioned in passing in one of his Little Shoppe of Horrors that this is the first book on Hammer in ages that doesn't even quote or mention his own magazine or others such as Dark Terrors or Wayne Kinsey's The House That Hammer Built.

Now this is not grandstanding from Dick's part, just a simple statement of fact. Over the last decade or two tons of original research has been published in those magazines and not referring to it when you are writing a history of the company is just plain idiocy.

Even worse: Though the author acknowledges a number of people who helped him write this book, the closest we come to genuine Hammer celebs on that list appear to be Francis Matthews and Kate O'Mara. Now if there is one thing that I have learnt in all my years as a Hammer Aficionado it is that both the original talent as well as the general Hammer Fandom is a very close community that is always easy to reach and as a rule available to help. Don Fearney's events e.g. have proven time and again how easy it can be to communicate with most of the still surviving artists in front of and behind the cameras, so it will remain a mystery why McKay didn't bother to simply contacting some of those for his book.

Little wonder so that the book contains a number of clonkers. To quote but a few random ones that sticked in my mind:

It is Olinka Berova, not Nelova. Just as it is John Van Eyssen, not Jonathan. An amusing anecdote of an exchange between Laurence Olivier and Flora Robson is quoted back to writer Matthew Sweet who, however, never seems to have heard of it. McKay also keeps repeating the old chestnut of more outré Continental or Japanese versions of their films regularly being shot by Hammer when the proven instances of that ever happening are actually very few and far between.

OK, so the book has about 300 pages which means that this still leaves it to be 90+% correctish if somewhat superficial and marred by constant attempts at ultimately not very funny humour by the author who also seems to have felt the need to often interject the flow of the text with hints that – I paraphrase - “more will be explained in chapter 8”.

What I found most annoying, however, was that McKay for the most part seems to view the Hammer movies as “camp” and something that is generally being laughed at when viewed these days. This is one of my pet peeves. Say what you will and feel free to dislike Hammer movies or even to find them too old fashioned or even, gulp, boring, but very few Hammer oeuvres deserve to be called camp. Moon Zero Two or The Lost Continent may come to mind as possible contenders but overall their output was just about as un-camp as can be. In actual fact after harping on a few dozen times about the camp enjoyment to be got out of Hammer movies, McKay then even does a 180-degree U-Turn and declares that “Hammer, on the whole, did not do camp” (p. 263). Hmm, methinks it's serious Make-up-your-mind-time on this aspect, Mr McKay.

If at this stage you get a feeling I may have wanted to chuck this book into the bin after reading it, you'd be wrong. If this had been the first book on Hammer I'd have adored it warts and all, but the trouble is that so much has already been published on the subject by much better Hammer historians than McKay is that he ultimately faced a losing battle with his irreverent approach. Over the next couple of months at least another three books on Hammer are scheduled to be published and my hunch is that every single one of them will be better than this Thing of Unspeakable Horror.

Those books, however, will also very likely be considerably more expensive. Hammer over the years has spawned a cottage industry of highly collectable, well written and/or wonderfully illustrated books on her history that are all aimed at the serious Hammer Collector who doesn't mind paying a bit extra for a new fix. What has been missing in the Hammer related book market is a relatively inexpensive mass market paperback aimed at cineasts who may only be marginally interested in Hammer movies in general and may not want to spend more than a tenner on a purchase.

McKay has aimed to fill that gap and it is just a pity that he didn't go just this extra bit further in his research and writing to make this a truly worthwhile addition to the genre related book shelves.

Right on the button,H2- it would be a fine book had all the Meikles,Hearns,Klemensens,Kinseys,etc NOT written their tomes thru the years- and it doesn't even have a wealth of great pix to compensate- In it's "defense" it was a disappointment to a Hammerhead like myself,but perhaps it would be just fine for the fringe fans...;o)

Excellent, not really for the hard core fans but OK-ish for the fringe group. Incidentally, you were the one I remembered saying at putting it aside when you knew more than the author. I hope my memory didn't betray me. :-)

You may be right about that,H2- because i haven't even opened that book again since then- in fact,I have a bookshelf that is just Hammer related and I wouldn't even place it near them- lol

Haha, yeah, I only now put it on my Hammer shelf after reading it. And it felt strange. Like the spotty neighborhood son no-one wants to talk to it is hiding behind the bigger cooler kids on the block.

Only book on Hammer that I re-sold on Amazon UK, real duffer.

I'm a hopeless critic. Can't help having an admiration for anyone willing to put the time and effort into producing a Hammer book. If it's acted as a 'gateway drug' for anyone to explore the films (and other books) further then it'll have served its purpose.

Pretty much useless, I'd say. The most uninspiring Hammer book since Howard Maxford's.

Must admit I always had a bit of a soft spot for Maxford's book. It sure isn't in the league with the big boys but at least it is nicely illustrated and came out nearly 15 years ago at a time when the market wasn't quite as saturated with Hammer literature as it is now. Most of the standard works on Hammer when this came out were mere thoughts in their author's minds and probably had barely made it to planning stage.