The Unknown Peter Cushing: An interview with Michael McGlasson 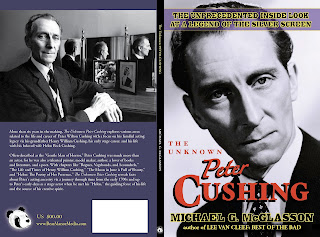 More than six years in the making, The Unknown Peter Cushing explores the life and career of Peter Wilton Cushing with a focus on his familial acting legacy from grandfather Henry William Cushing, Peter's early stage career, and his life with his beloved wife Helen Beck Cushing. Often described as "The Gentle Man of Horror," Peter Cushing was much more than an actor, for he was also a talented painter, model maker, author, a lover of books and literature, and a poet. The Unknown Peter Cushing reveals facts about Peter’s acting ancestry via a journey through time from the early 1700's and up to Peter’s early days as a stage actor when he met his Helen, the guiding force of his life and the source of his creative spirit.

Michael McGlasson, the author of the book, has kindly agreed to a little interview for the readers of this blog.

HH: Michael, can you introduce yourself to our readers? What's your background and what other publications have you been involved in in the past?

MGM: I've been writing in some capacity for more than forty years, but it wasn't until about the late 1980's that I began to take writing seriously. At first, I sort of stumbled around in the dark because I couldn't decide which path to take. I wasn't sure if I wanted to write academically (which I still do) or stick to short stories, poetry, screenplays, and the like. Since I've always been a great fan of horror films, going back to the late 1950's, I figured that maybe I could write about the movies. Of course, people like David J. Skal and William K. Everson were way ahead of the game, so I decided to start doing research on horror film actors that others had kind of ignored. By the late 1990's, my interest in Peter Cushing had grown considerably, and after reading his Autobiography, I became fascinated with his ancestral past. At about this time, I ran across Christopher Gullo through his Peter Cushing Museum and Association website. To my great surprise, I found out that he was writing a biography on Peter and then we sort of got together and one thing led to another. I ended up editing his book In All Sincerity. . . .Peter Cushing and we became great friends. Outside of the movies, I've had material published in academic journals on Edgar Poe, Bram Stoker, Christopher Marlowe, and Sir Henry Irving, plus some poetry and few articles in the Journal of Dracula Studies. One of my poems is slated to appear in The Spirit of Poe anthology by Literary Landmark Press. All of the proceeds from the sale of this anthology will go to help save the Edgar Allan Poe House in Baltimore which the city plans on closing because of budget cuts.

HH: How would you summarise your book to potential readers? What would you say is its unique selling point?

MGM: Well, first of all, the book is not a true biography because I only cover Peter's life and career from the time of his birth in 1913 and up to the death of Helen in 1971, just like Peter's autobiography. However, the chapters on Peter's early ancestor John Cushing and his grandfather Henry William Cushing are heavy in biography. What I've discovered about Peter's grandfather should appeal to most readers and I hope they see the connections between Henry Cushing and his grandson. I guess that anyone who likes Peter Cushing the actor would find the book a good read. I should mention that 90% of the information in the book on Henry Cushing has never been published anywhere except of course in the original source material.

HH: With its strong emphasis on Cushing's genealogical family history, this is a very unique publication but would you recommend it as an introductory book for a beginning Peter Cushing fan? What do you see as your target audience?

MM: I would recommend that anyone interested in Peter Cushing should read his autobiography first and then read the book. My reason for saying this is because at least they would have some familiarity with Henry Cushing, due to Peter's brief but fascinating account of his grandfather and other acting relatives in the first chapter of his autobiography. As to the audience, my intention was not to target any one group, such as lovers of British theatre or Sir Henry Irving. If you happen to be a fan of Peter Cushing, then I guess that's the target audience.

HH: It is obvious that this was painstakingly researched. Can you describe the research process from the first idea to the final product? What resources were made available to you? Are there resources you wish you'd have had access to but didn't?

MGM: The first time I read Peter's autobiography, I became fascinated with his family acting past. What little information Peter provides about his grandfather Henry Cushing, his aunt Maude, step-uncle Wilton Herriot, and the long-lost "Uncle Bertie," was enough to get me started. So I began digging for more information. I contacted libraries, special collections, bought books on Ebay and from other booksellers; I also bought a short-term subscription to the web-based The Era and The Stage, two theatrical newspapers that were popular during Henry Cushing's stage career at the Lyceum. These two sources gave up more than I had imagined. First I found Henry Cushing's obituary, then his funeral notice. Then I started looking in the London Times that provided information on the plays that Henry Cushing performed in at the Lyceum. Then I discovered his opera career. One thing led to another, and soon I had a foot high pile of information. Of course, Christopher Gullo helped out with some special items. Unfortunately, I could not uncover a photo of Henry Cushing. Sure would like to know what he looked like! Maybe Peter in the flesh! Also, Joyce Broughton supposedly owns some of Peter's personal family items, but she told me most of it was gone. Sold I guess or given away. If I would've had the money, I would've flown to London to start digging in the British Library and its excellent newspaper library which also helped out with the book.

HH: What was the most challenging part of the research and how did you overcome it?

MGM: The hardest thing was taking all of the information I had found and making sense out of it. All of the information just piled up and trying to sort through it all, keeping things in order like dates, places, names, etc., was pretty damn hard. It took me at least a couple of months to read it all and then arrange it chronologically. Fortunately, I was already familiar with Sir Henry Irving which helped greatly. All it really takes is time and enough dedication to putting it all down on paper in a way that people will understand it.

HH: Had you done genealogical research before? Maybe for your own ancestors?

MGM: Not really, but I did some research on my own family history several years ago. It takes a special talent to be able to sort through thousands of documents and pinpoint what you really are looking for. As to my own ancestry, Scotland is home base. In Gaelic, my surname means "Son of the Grey Lad." Also, I discovered that my Scots ancestors did not belong to a specific clan; they had their own clan, their own tartan, and heraldry. The most exciting, or maybe I should say depressing, thing was that all but one of the male members of the McGlasson clan were killed at the Battle of Culloden in 1746 between Bonnie Prince Charlie and the Royal Troops of King George II. The only surviving male member left Scotland and settled in Virginia in 1750. So my American heritage goes back more than 250 years.

HH: In your personal opinion: Do you believe that there is a connection between our ancestors and ourselves? Can the “spirit” (for lack of a better word) of our forefathers influence our personality or choices? Some of the similarities between Cushing's history and some of his ancestors are quite striking: Do you believe these similarities are ultimately random or in some way predetermined?

MGM: Like I mention in the book, Peter certainly knew when he was a young boy that he wanted to be an actor. He even mentions his "lineal blood" stirring within him. Without a doubt, the actions of our ancestors greatly affect ourselves, meaning that whatever an ancestor decided to do at some point in his life, such as pick up arms against the King of England and die on the battlefield, affects the future lives of his ancestors. I don't believe in fate or destiny, nor do I think it's random. Perhaps pre-determined but only mathematically. The big wheel in the sky keep turning and sometimes it stops at just the right point in time. It overlaps with the past and things tend to happen again. But it is eerie in many ways.

HH: Do you have any new projects up your sleeve?

MGM: I've decided to take a very different path through Robert Frost's "lovely, dark, and deep" woods this time around. My next project will be on Linda Lovelace. Yes, I know what you're thinking--"Are you nuts?" Well, maybe. But this will really be a challenge because of the lack of solid and reliable primary sources on her life and career as an "actress." Should be a lot of fun.

Thank you for discussing your book The Unknown Peter Cushing, now available at Amazon, Barnes & Noble, Bear Manor Media, and other book sites.