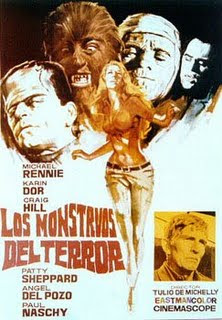 My buddies at the Eurotrash Paradise Group alerted me to this Spanish language obituary. It appears Paul Naschy passed away this morning at the age of 75.

Born Jacinto Molina this Spanish Wrestler over the decades was going to become Spain's most influential cult actor. The fact that he played classic monsters such as werewolves, mummies, Dracula, Dr Jeckyll and Mr Hyde, The Phantom of the Opera, The Devil, Frankenstein's Monster and many more – often several in one single production – earned him the nickname “the Spanish Lon Chaney”.

Though I must admit that I was never his greatest admirer I always appreciated the enthusiasm he brought into his creations. Whatever his films may have been lacking in production values, he more than made up for it in pure passion. Naschy was first and foremost a fanboy by heart who probably could never believe his luck that he was allowed to make a career out of his admiration of the classic Universal Horror movies. Though clearly influenced by the old black and white Hollywood movies, Naschy managed to create his unique Iberian vision fuelled with blood, gore, frequent nudity and monster mashes that were only too appropriate given the actor's wrestling background.

His most famous character was the tragic werewolf Waldemar Danisky, a part he played in more than a dozen films. Contrary to the classic Universal or Hammer Horror movies those films never really made up a specific Daninsky “universe”. Other than the name of the character there is little that unites those productions that feature a variety of unrelated plots and time lines.

Though a genre director in his own right he often featured in productions directed by Leon Klimovsky. In later years another Fanboy-turned-director, Fred Olen Ray, would take him under his wings, introduce him to US Film conventions and direct him in straight-to-video Tomb of the Werewolf (2004) for a final outing as Waldemar Daninsky.

Top of my list of favourite Naschy movies is Assignment Terror (1970), a madcap monster mash from 1970 featuring aliens reviving a vampire, a mummy, a werewolf (none other than Waldemar Daninsky) and Frankenstein's Monster in order to take over the world. This film also features Michael Rennie in his last production and lovely Karin Dor.

Another guilty pleasure is Howl of the Devil with Caroline Munro, a self indulgent but strangely fascinating film in which Naschy must have broken his own personal record and appeared in eleven different parts playing two brothers as well as Rasputin, Bluebeard, Fu Manchu, Frankenstein's Monster, Mr. Hyde, Phantom of the Opera, Waldemar Daninsky, the Werewolf, Quasimodo and the Devil. Have I missed any?

It will take a bigger Naschy authority than I am to properly do the man and his career justice, but in the meantime I will raise a glass of Rioja, flick through Thorsten Benzel's loving book homage Muchas Gracias Senior Lobo and celebrate the life of Spain's most fascinating Trash movie star.

Thanks for the memories!

Email ThisBlogThis!Share to TwitterShare to FacebookShare to Pinterest
Labels: Other Stuff, Paul Naschy

I haven't yet seen any of Mr. Naschy's films, but I've read much about him, and this is sad news.