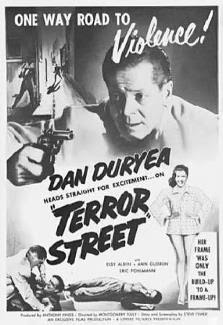 Judging from the first 15-20 minutes of Terror Street – or to give it its more appropriate British title 36 Hours – this could be Hammer's best Noir.

A US Airforce pilot (Dan Duryea) secretly makes a trip to England to meet up with his estranged wife. He has 36 hours before he needs to report back and may face a court martial if noticed missing. Needless to say his wife has started mixing with the wrong crowd and is found murdered. All clues point to Duryea who needs to find the real killer in time for his trip back to the States.

One of Film Noir's main themes is that of alienation. And noone gets more alienated than our reluctant hero who had chosen his career over his marriage and now tries putting back the pieces of his messed up private life.

The trouble with this film is that there never is the slightest bit of mystery. The real murderer is shown right from the start. Any potential threats are soon averted as absolutely every single character quickly opts to work together with Duryea and seems to guess straight away who the killer may be. After a tremendously good start to the film this is all very disappointing and overall just makes for a very average Hammer Noir.

Worst of all is the ludicrous 36 hour ultimatum. Duryea's character is in constant fear that his temporary defection may be noticed, but one would think that the fact that he may actually be arrested for murder should be a more serious threat than going AWOL for the first time in his career.

Duryea is a capable hero and cast against his usual type. Also look out for Eric Pohlmann in another welcome appearance for Hammer.

I'm starting a month of Hammer reviews, any recommendations on some of the best ones? I've only seen a few.

Looking forward to that month!!! I guess it goes without saying that the Dracula and Frankenstein movies need to be covered somehow. My favourite of the lot is actually DRACULA - PRINCE OF DARKNESS. Other genuinely good Hammer movies IMHO: KISS OF THE VAMPIRE, THE MUMMY, THE HOUND OF THE BASKERVILLES, THE CURSE OF THE WEREWOLF, THE DEVIL RIDES OUT, VAMPIRE CIRCUS, CAPTAIN KRONOS VAMPIRE HUNTER, THE LEGEND OF THE SEVEN GOLDEN VAMPIRES. The list is endless. As for guilty pleasures: I'd watch DRACULA A.D. 72, LOST CONTINENT and MOON ZERO TWO anytime. And I haven't even mentioned the Psychothrillers. Or Swashbucklers. Or comedies. (OK, stay clear of the comedies. LOL)