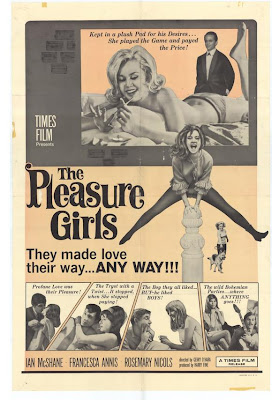 I managed to get a hold of the rare Swinging London flick The Pleasure Girls starring a young Suzanna Leigh next to the always watchable Klaus Kinski in a morality play that I probably enjoyed more than I should have.

Francesca Annis plays a young country girl visiting London to start a new job with a model agency. She has one weekend free prior to starting her new assignment and together with her other female housemates immerses herself in all that London has to offer, but soon needs to learn about the dangers inherent in mixing with the wrong bohemian crowd.

Given that this is meant to come across as a warning to the curious it is amazing how easily the girls generally get off. If anything it is the guys in their lifes who get punished, beaten, threatened by loan sharks and generally left for dead.

The girls mainly come away with a few life lessons and one baby on the way. (Certainly not the big shocker these days than it may have come across at the time.) Annis' character even gets a boyfriend, Ian McShane in one of his first roles. He plays a dodgy photographer who realises that he can really fall for the right girl if only she refuses to go to bed with him. Aaaahhhhhhh.......

Suzanna Leigh and Klaus Kinski are the most interesting couple of them all: Kinski playing a ruthless gangster and gambler with a wife in one home and Leigh as his moll in a different luxury apartment. His character secretly aims to go straight and to find a way out of the criminal way of life. He genuinely seems to be fond of Leigh's character and his performance is excellent. Often relegated to short but memorable bit parts, this is one of his longer and most memorable supporting roles. He manages to beautifully convey the two sides of his personality, the ruthless gangster and the caring private man.

Suzanna Leigh has a brief but welcome topless scene in his luxury bedroom and overall holds herself well against Kinski, an actor known to easily drown all other performances around him.

The most amazing WTF moment comes when a character who from the start is introduced as being openly gay and camp and without any apparent interest in the girls outside of a friendship level eventually gets outed as being, well, gay. Shock, gasp, who'd have thunk?

Overall this is a flawed but enjoyable production that never quite seems to be able to figure out what message it is trying to convey, but that regardless makes for an entertaining way to pass a quick hour and a half courtesy primarily of future Hammer Girl Suzanna Leigh and Germany's most interesting character actor.
Posted by Holger Haase at 4:01 PM