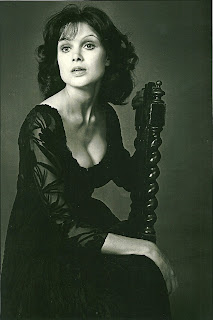 Maddy, Madeline or even Madeleine Smith. All three versions of her first name appear in Hammer literature, sometimes even inconsistently in one and the same article. For the sake of continuity I will stick to the most appropriate one: Madeline.... simply because that is the way she signs her own autographs.

Anyone who thinks that the cult of being a celebrity just for celebrity’s sake (read: the likes of Jordan or Paris Hilton) was something recent, needs only to look at Madeline Smith’s career. Though she’s one of the ladies who managed the Hammer/Bond (Live and Let Die)/Carry On (Matron) hattrick, only Hammer – the studio that discovered her with Taste the Blood of Dracula - really took full advantage of her status and wrote reasonably large parts for her in The Vampire Lovers, the wet dream for Hammer Glamour lovers, and as the mute girl Angel in Frankenstein and the Monster From Hell. In most other movies she gets very little exposure and – taking all her non-Hammer feature performances together – you’d be hard pressed to get enough screen time to fill 2 hours. It is quite clear that even in her Hammer movies she is not exactly hired for her acting talent as her voice is dubbed in the The Vampire Lovers or mute in Monster from Hell.

For a period in the early 70s, however, Smith consistently appeared in photos in the press and managed to raise many a male heartbeat with her innocent looking English Rose doll face combined with a general disregard for clothing. In actual fact, she was so popular during that time that comic strip artist J. Edward Oliver regularly featured her and her talents in his ongoing series of strips. He once even designed an entire one-page comic about "The Life and Habits of the Madeline Smith". When Smith finally complained about her portrayal, Oliver stopped drawing her… but not before drawing a final farewell strip about the call he received from her.

Born in Hartfield (Sussex), she was discovered while working in a boutique and hired to perform a striptease in a London play. Interesting career path for a former convent school girl.

She was married to actor David Buck (The Mummy’s Shroud) who passed away from cancer at the age of 53.

She also played the character of Mollie on stage in Agatha Christie’s Mousetrap.

Away from Hammer, Smith’s other notable genre appearances were in Theatre of Blood and Silent Night, Deadly Night. She was more prominently featured in a string of typical British sex comedies that often gave her a chance to show off her ample physique and also starred fellow Hammer Girl Julie Ege: Up Pompeii, The Magnificent Seven Deadly Sins and Percy’s Progress. She also appeared in Up The Front and The Bawdy Adventures of Tom Jones.
Posted by Holger Haase at 3:59 PM