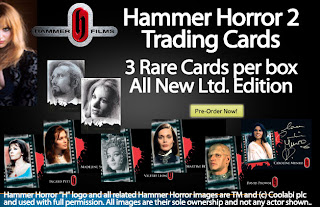 When Strictly Ink released their first set of Hammer Horror trading cards I was seriously impressed. Now it looks like they're on the verge of releasing a second set that promises to be equally worth having. Will write more about this, when/if I get my own set and would in the meantime appreciate comments from folks who may already have seen it.

It looks like a good number of Hammer Glamour stars have signed their cards for the series and that some of the cards have been designed by well known artists such as my good buddy Neil Vokes.
Posted by Holger Haase at 3:46 PM

When I was a nipper in England in the '70's, Hammer trading cards were second only to Star Wars in popularity (And I personally liked them better). I had hundreds of 'em, though I never did get the whole set.