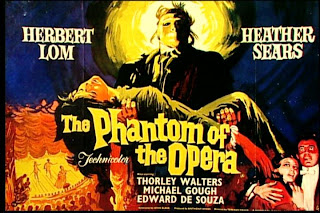 At the time Hammer filmed The Phantom of the Opera, the subject had not yet been overkilled through musicals or countless other adaptations. Over the previous decades there had been a small number of other films made based on Gaston Leroux’ novel – most notably Lon Chaney’s famous silent movie from 1925 and Arthur Lubin’s 1943 production -, but time was ripe for a new interpretation and the folks at Hammer were hoping to do for the Phantom what they had previously done for Dracula and Frankenstein and to introduce a new generation to this classic monster.

The production was ambitious. At one stage Cary Grant was even being courted for the lead which could have opened up a whole new audience for Hammer movies. In the end, it was Herbert Lom who accepted the part and brought a lot of class to his role. His acting is very reminiscent of Christopher Lee’s in The Mummy. In both cases we have classic examples of actors overcoming the limitations of a facial mask and demonstrating an incredible acting range that lesser actors without the hindrance of the special makeup can’t even begin to reach. Lom’s mellifluous voice just adds to the subtle range of emotions he is able to display for this role.

Perhaps not unusual given the subject matter, but not very typical for a Hammer movie, The Phantom of the Opera is a very musically oriented production. An original opera based on the life of Joan of Arc was composed for this film by Edwin Astley, lengthy excerpts of which are shown throughout the movie. The cinematography is often stunning. The picture is saturated in full, rich colours and makes the movie not just a feast for the ears, but also for the eyes. Trouble is, however, that it just ain’t very horrific as those lengthy musical interludes, beautiful as they are, just end up distracting from what little horror there is in it. It seems that by aiming this film at a slightly different and more main stream audience, Hammer ran the risk of alienating its loyal fan base as this has little of its usual horror set pieces and also only a small number of Hammer’s regular team of players. Apart from Michael Gough - who as often the case with his roles relishes chewing as much scenery as he can as the truly despicable Lord Ambrose d’Arcy - and Michael Ripper – surprise, surprise in a cameo part – there are few familiar faces.

The film proved to be Edward De Souza’s first major screen role. His next was in Kiss of the Vampire before he became a successful actor in a range of different TV series. Here he convincingly, though not very memorably, plays the part of the bland hero who needs to save Heather Sears’ character out of the clutches of Michael Gough’s lecherous Lord and to ensure that Lom’s Phantom does not cause all too much damage.

Sears as the heroine is terribly miscast. She sure isn’t the type who could infatuate three men all at the same time. Certainly not with that bird’s nest of a hair cut. Sears’ singing voice was dubbed by opera singer Patricia Clark.

The most memorable scene involves future Dr Who Patrick Troughton as a disgusting rat catcher who freaks out some ladies of the night who were visiting the Opera (that atypically is not located in Paris)…. just to be killed by a dwarf (Ian Wilson) through a stab in the eye.

Also look out for Thorley Walters and Miles Malleson.

Overall, this is an interesting and beautiful movie that nevertheless ends up a bit of a failed experiment when it comes to delivering the goods as a horror production with splendid opera scenes aplenty that do, however, drown out most of the action.

Cary Grant was actually up for the Edward de Souza role, according to Anthony Hinds in Wayne Kinsey's Bray Studios book. But you're right--what a bland part!

Oooh, I can't agree! I think the film is THE Hammer masterpiece, and Heather Sears is just right...

Pretty much spot on I think. I like that it is more romantic than the average Hammer but agreed if you want thrills and spills it's best to go elsewhere. I think Hammer perfected the recipe with 'Hands of the Ripper', which managed to be both hugely romantic and violent at the same time.