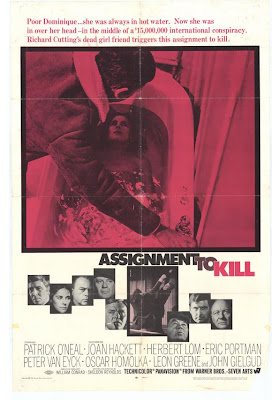 At the height of the Bond boom in the 1960s a very small number of films followed in the vein by presenting insurance investigators as some of the most unlikeliest professionals to ever grace the action screen (also see my review for Deadlier than the Male).

I recently caught a rare screening of Assignment to Kill with Patrick O’Neal in the role of Richard Cutting, the globetrotting, gun swinging, drink swilling and babe bedding investigator on the track of a multi million dollar insurance fraud.

I was pleasantly surprised to see so many Hammer actors in this production, hardly Hammer regulars but still familiar faces for Hammer aficionados.

Peter van Eyck (The Snorkel) is the guy that everyone is after. In the knowledge of proof of a gigantic insurance swindle that cost countless lives, the bad guys want him dead, the insurance companies want the info that he apparently has in his possession.

Herbert Lom (The Phantom of the Opera) for the first part of the movie comes across as the slick, professional Baddie who’s got it all under control. He is ice cool, witty, ironic and intelligent, exudes the charm of Evil and appears fully in charge… until the tables turn and his own boss starts selling him out following the advice of O’Neal’s character. Lom soon becomes a helpless pawn in a bigger game. Lom is as usual highly watchable. I am always surprised how much I enjoy his performances and how little I then follow up on actively tracking more of his movies. (Mind you: I did buy his novel Enter a Spy about Christopher Marlowe the moment I saw it in a second hand book store all those years ago, so hopefully that alone allows me to carry the fan badge.)

Leon Greene’s (The Devil Rides Out) character does not carry a name, talks very little and is just being introduced as “The Big Man”. He is one of Lom’s henchmen and effectively carries out his dirty work. Though he is the tough, quiet and cruel type, his body language alone also indicates how much he seems to enjoy getting involved with every twist and turn of this intelligent cat and mouse game. In actual fact, for the most part the film seems to be focused primarily on playful winks, attacks and counter attacks that it comes as quite a shock when halfway through the production The Big Man’s actions end up responsible for a tragic event that happens to a character we have grown to like.

Though it seems obvious that the financial backers for Assignment to Kill were hoping for a movie following in the footsteps of a certain Double-0 agent, the film for the most part foregoes lengthy action scenes in favour of witty repartees in an atmosphere of mutual distrust between the characters. Lies are countered with lies and in the end no one is ever the wiser as to what had really happened. The search for the illusive proof about the insurance caper becomes the ultimate MacGuffin and the overall feel of the production for the longest time resembles a different kind of spy thriller and is indeed very reminiscent of Hitchcock’s early works. We even have a scene in which John Gielgud, the ultimate evil mastermind in this film stands in front of an awe inspiring scenery of the Swiss mountains and inwardly probably reminisces about his time with Hitch when filming Secret Agent. Another Hitchcock actor appearing here is Oskar Homolka (Sabotage) in a wonderful performance as a police inspector who is fully aware that his hands are bound. What he can’t do in active pursuit of the leads, he makes up in covering up some of Cutting’s actions.

Assignment to Kill appears to have been director Sheldon Reynolds last feature film, although it seems that 12 years later he may also have been involved in some episodes of a Sherlock Holmes and Doctor Watson TV series. (What was he involved in in the interim?) Prior to Assignment he had already dabbled in some spy capers when filming the Eurospy portmanteau movie Killer’s Carnival (starring Stewart Granger, Pierre Brice, Lex Barker, Klaus Kinski, Margaret Lee and Karin Dor).