Hammer and Beyond receives the Premio Dardos 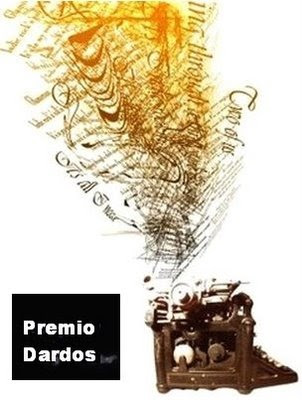 I just checked some backlinks through Technorati and discovered to my surprise that the CobWebbedRoom has awarded me the Premio Dardos. Needless to say I am over the moon. Great way to start the day. Always nice to get some recognition.

I always feel that it’s an award just to have a chance to interact with other like minded people. It may come as a surprise to hear that, but I actually don’t like writing all that much. There are lots of times when I wonder why I even bother as writing generally doesn’t come easy for me, but I do like sharing and in the end writing is an excellent way to get to know other likeminded people. If it wasn’t for that I doubt I’d ever put virtual pen to virtual paper. I do admire writers like Mikhail Bulgakov, one of my all-time heroes, who wrote his master piece The Master and Margarita over the space of a decade or so effectively for his bedroom drawer as he knew that the novel would never be published in his lifetime.

Suffice it to say, I don’t have that writing compulsion. At all. Without a chance of feedback I couldn’t see the need to put anything to paper, so anytime I get a comment or an email query about something I posted or some tidbit that I wasn’t aware of before (or even the occasional review copy) that’s reason for me to go on with another post.

So getting an award for me is the ultimate encouragement to do what I do.

Paul from the CobWebbedRoom sums up the raison d’être of the Premio Dardos in his own words:

“I am sure that all Bloggers and writers of websites would be grateful of some sort of regognition for the contribution they bring to their readers, well the Blogging world has the Premio dardos award which is given for excellence in the Blogging field. It is a way of showing that readers of your blog have some respect and think that your blog is worthy of such a accolade. It works in a similiar way to a chain letter - you have to pick 5 blogs that you think deserve a pat on the back for their excellence, these are emailed and then they have to do the same.”

Well, I am German and I need my proper set of rules and regulations, so I googled info about the award and interestingly enough came up with tons of sites who have received the award, yet no official site for it. Some recipients claim you have to nominate another five blogs, others mention 15. The most generally accepted terms appear to be along the lines of:

"The Dardos Awards is given for recognition of cultural, ethical, literary, and personal values transmitted in the form of creative and original writing. These stamps were created with the intention of promoting fraternization between bloggers, a way of showing affection and gratitude for work that adds value to the Web.

1) Accept the award by posting it on your blog along with the name of the person that has granted the award and a link to his/her blog.

2) Pass the award to another five blogs that are worthy of this acknowledgement, remembering to contact each of them to let them know they have been selected for this award."

I eventually came across this fascinating post from K-Squared Ramblings about his attempts to track the origins of the award.

Needless to say now I am even more ecstatic about it. There’s something quaintly post modern about getting real recognition from a real blogger in the form of an award that for all attempts and purposes doesn’t officially exist, yet has been received by others throughout the blogosphere. I bet Umberto Eco would get a kick out of this. Mark my words, at some stage he is going to write about it.

So here are my nominees for the Premio Dardos. I am not too concerned about the numbers nominated as no-one seems to have the official score about it, though I will not mention more than 15, the highest possible numbers of nominees. I will also attempt (but probably fail miserably as most of my favourites already seem to have one) not to nominate anyone who has been nominated before. So e.g. Groovy Age of Horror is not going to get another nomination from me.

In no particular order:

Email ThisBlogThis!Share to TwitterShare to FacebookShare to Pinterest
Labels: Awards, News, Other Stuff

Thank you so much for nominating my blog for the award, Holger! Yours most definitely deserves it.

"Well, I am German and I need my proper set of rules and regulations"
- ROFL! Coming from a German background, this had me laughing no end.

"so I googled info about the award and interestingly enough came up with tons of sites who have received the award, yet no official site for it."
Sounds like someone needs to start a site for it, then! Nudge, nudge...

Thanks again, and congrats on your award.

The funny is that I was thinking that it would be ultimate in postmodern irony if someone was going to set up an offical Premio Dardos award now after they have all been handed out. LOL

I recently came accross your blog and have been reading along. I thought I would leave my first comment. I dont know what to say except that I have enjoyed reading. Nice blog. I will keep visiting this blog very often.

Hooray! Thank you very much for the award. I guess it's my first one ever. But I think I need some time to think about the blogs I pass the award to.