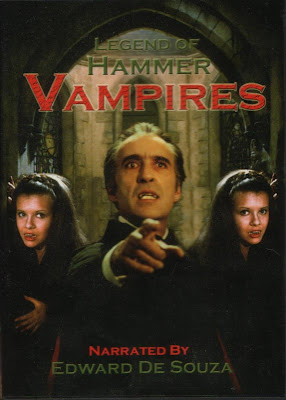 I have been very remiss in not writing much so far about the Legend of Hammer DVD on this blog until now, so this post should hopefully give me some absolution.

Legend of Hammer: Vampires is a documentary created by Don Fearney, the man behind the Hammer at Bray and Cine Lumiere events. Over the years Don has managed to invite just about every one of the surviving members of the Hammer family to his intimate events. (Well, that is everyone with the exception of Christopher Lee, of course.) That he managed to do so without apparently having his own website or even email address is an indication that nothing beats pure passion when it comes to organising those dos. Over the years fans visiting his events have gotten used to the idea that they may need to send letters (you know those things that you need to put stamps on) to Don in order to purchase tickets or that in order to determine availability you may even need to give him a long distance phone call. As a result of all this he has managed to be personally identified with these events and has established himself as one of Hammer fandom’s most recognisable personalities.

It’s little surprise so that Don’s first foray into Hammer documentaries (and I do hope he will venture out to also create similar films about Hammer’s other series and genres) often comes across as a veritable Who’s Who of Hammer personalities and offers a good overview of the regular celebrity visitors that frequent his events. In actual fact some of the interviews were clearly even shot during those occasions and will easily bring more than just a hint of memory back to the attendees watching this.

Though the majority of the documentary is indeed very much interview focused, we also get to see lots of rare behind-the-scenes footage and pictures and clips from the various films.

One of the most original aspects of this documentary are the introductory scenes, starring none other than Don himself together with John Cater (Captain Kronos, Vampire Hunter) as grave robbers on the run from a copper. After finding Dracula’s grave all is revealed as a studio set with John Forbes-Robertson (The Legend of the 7 Golden Vampires) stepping out of the shadows to introduce the subject matter of this documentary. Written by Dark Terrors editor Mike Murphy, this opening scene properly replicates the atmosphere of a classic Hammer horror movie, treats the memories of those films with respect and never descends into a knowing ironic nudge nudge winkery. If only Beyond the Rave could have been more like this!

The documentary was initially premiered in early 2007 during one of his events in London’s Cine Lumiere together with the book launch of Wayne Kinsey’s second Hammer oeuvre. I missed the first half at the time as I was lunching with Caroline Munro. (Sorry, really couldn’t resist that.) This DVD is a new slightly revised edit of the film that was shown then. One or two bloopers were obviously removed (Horst Janson being Dutch?) and a few new interviews shot during the following Hammer at Bray event were added.

In case it is not clear enough: Legend of Hammer: Vampires is an absolute Must Have for anyone only remotely interested in these movies and if you managed to find this blog, this probably means YOU!

The DVD can be ordered directly with a £ Sterling check (£13 + £2.50 P&P) through snail mail to Don Fearney, 25 High Hill Ferry, Bakers Hill, London E5 9HG, UK or more conveniently through Paypal to figsculpt@aol. Payments through Paypal can also be made in US$ ($25 + $5 P&P). Although advertised on the DVD cover as a Region 2 DVD, this is indeed a Region 0 (i.e. Region free) release that should play on any DVD player worldwide. The DVD was released a few months ago in 2008. To the best of my knowledge copies are indeed still available, but you may want to check with Don first.
Posted by Holger Haase at 11:55 AM

Great documentary. The interviews included anecdotes I hadn't heard before, which is refreshing when you tend to pick up books and documentaries that simply recycle the same stories over and over. I agree that the opening captured the spirit of Hammer horror very well.

With the John Gilling interview, the DVD does indeed sound like a must-have.

I am definitely going to order this!!

The Gilling interview is great - he's such a grumpy bugger and doesn't seem to like anybody's work except his own.

Major boo boo from my side. Thanks for spotting this. Will correct this right away. Don't want Mike to be seen in such bad company. ;-)

It really is an informative and well made documentary. As much as I admire Ted Newsom's Flesh & Blood, it's nice to finally see a British made feature on Hammer. Thankfully, this can also be ordered from Hemlock Books.

Now somebody just needs to tackle the Frankenstein series!