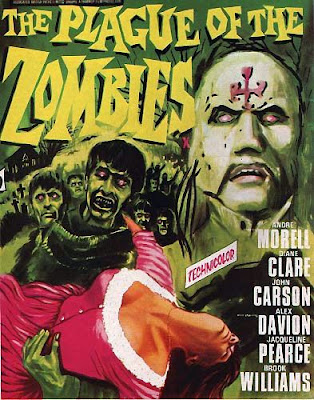 I am currently reading Jamie Russell’s truly excellent Book of the Dead and felt it only appropriate to therefore rewatch Hammer’s Plague of the Zombies even at the risk of seeing it yet again during Don Fearney’s John Carson tribute later this year.

Russell highlights quite correctly that Plague is the first Zombie feature that abandons the racial elements of earlier genre productions such as White Zombie in favour of more typical (for Hammer) elements of class themes. He does not go very in depth into something that became quite poignant upon this viewing, the striking similarities with Hammer’s most aristocratic Undead, their original Dracula.

It’s amazing how much of Plague was lifted directly from this earlier Hammer classic.

When Sylvia Forbes (Diane Clare) gets accosted by the Squire’s (John Carson) Young Bloods in his mansion, threatened and tossed around, it is the Squire who puts an end to this when he arrives at the top of a staircase, screaming his commands before running down the stairs and punishing the main perpetrator. Compare this with Dracula interrupting the attack against Jonathan Harker by his female vampire and remember that in Bram Stoker’s source novel he was actually attacked by a whole group of Dracula’s “brides”, not just the one.

In order to gain a hypnotic influence with the females of the household, the Squire, just like Dracula, needs to first of all be invited to the house and then draw the ladies’ blood. Following that they are in a state of possession and under his spell.

Even the scene where the doctor (Brooks Williams) and Sir James (Andre Morell) visit Alice’s (Jaqueline Pearce) grave, see her come to life again and kill her off, mirrors the killing of Lucy in the earlier production.

Any other similarities I may have missed? It’s interesting to see how alike those scenes actually are given that neither the writer (Peter Bryan) nor the director (John Gilling) were involved with Dracula.

A lot of the commentaries I've read on this talk about it being a remake of The Hound of the Baskervilles, haven't heard anyone else compare to Dracula.

Whilst Gilling doesn't go down the racial domination of earlier films, Plague does go back to White Zombie's theme of slavery though - unlike most of the other zombie flicks I've watched, Gilling's Zombies are subservient and there to serve an "aristocracy".

I've an article prepared somewhere which looks at this... in the meantime I commented on it here: http://www.unofficialhammerfilms.com/articles/potz_cornintro.html

As Robert said, this has a lot in common with The Hound of the Baskervilles, whose writer (Peter Bryan) it shares. The redbloods are the most obvious element harking back to Hound.

Never noticed the similarities with Dracula.

If you've never read my essay on Plague of the Zombies, please do!

Similarities with the HOUND? I guess what they primarily refer to would be the opening scenes, not the main Holmes backstory? Will check out your articles. I am surprised that noone ever seems to have compared this with DRACULA as I find the relevant scenes painfully obvious.

Here's another similarity with Dracula: In both films the two ladies of the household get under the Aristocrat's spell, the first one dies (bringing the danger home to our heroes), the second one gets rescued at the last minute during the film's climax.

Incidentally something that I never understood: What is the interest that the Squire has for the two girls? Does he need them as workers? Hardly. He even seems to have two different sets of motivation for either one of them, being perfectly contended to have Alice turn into an ordinary zombie (Why?), but planning to sacrifice Sylvia (Again: Why?).

Sir James Forbes is definitely in the mould of Terence Fisher's Van Helsing - a strong figure of both faith and reason in the face of (an outwardly handsome and charming) evil.

John Carson has been compared to Christopher Lee.

Regardless of any connection to other films, "Plague..." is my least favorite Hammer film and in my views one of the most overated. I found it horribly dull and delivered little in the way of zombies, or much of anything else besides chatter.

Haha, Thwacko, truth be told for quite some time I also could not quite warm up to PLAGUE, but have finally come around to it. When it comes to overrated Hammers THE GORGON is first on my list. I also can't say I fancy THE REPTILE all that much, though it is years since I last saw it. I'll hopefully rewatch it sometime this year to see whether my feelings about it are still the same.

I swear you won't believe this Holger: I loved THE GORGON, and THE REPTILE is probably my second favorite Hammer film. Alls well, different strokes for different folks. Maybe I should give PLAGUE another viewing.

Haha, that's a beauty. Looks like our tastes are completely opposite. With that in mind I doubt a repeat viewing will change your mind for PLAGUE. LOL

What is the (haitian voodoo?) Sigil on The Squire's mask?

Not sure if that sign has any bearing to real Voodoo rituals. Roy Ashton said that for the mask he used both "imagination" and "documentation". ;-)