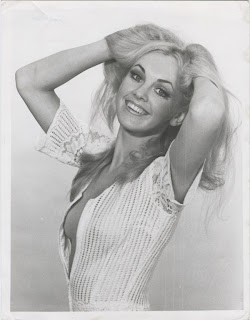 Born in Odense (Denmark) during the German occupation, her father emigrated with her family to New Zealand where she lived for most of her early years. She studied languages and while at university got her first couple of modelling jobs and also featured in some TV commercials.

Her first husband, John Betts, was a Latin and Greek lecturer with whom she moved to England in 1966 when he got a position at Bristol University.

For two short years between 1969-1971 Lindholm turned starlet and appeared in bit parts in all three Hammer Karnstein movies (the only actress to do so) as well as making the odd guest appearance on television (The Persuaders, UFO).

She fell in love with her Yoga teacher, a former musician who had played with the likes of Eric Burden and the Animals, Dusty Springfield and others. The two of them married in May 1972. Rather than become a Bond Girl - as she was discovered by Harry Saltzman when he saw her in the Hammer horrors - she moved to the US where she joined the Ashram Yoga community. She and her husband are now living in a Hawaiian retreat where she practices Yoga and alternative holistic medicine and goes under the name of Eleandra. She has now devoted her life entirely to studying and teaching alternative healing methods, though as revealed in Little Shoppe of Horrors #16, still fondly remembers her time with Hammer.
Posted by Holger Haase at 6:47 PM