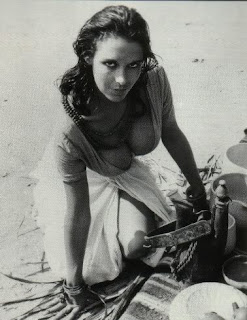 According to what source you read, Marie Devereux was either born as Pat (Patricia) Sutcliffe in 1940 in France and emigrated to England as a child or she was born in 1938 in New Malden/Surrey. She got her slightly exotic looks from her mother who was Spanish.

Her voluptuous 38-23-36 body first gained Michael Caine’s attention who subsequently introduced her as a 16 year old to Glamour photographer George Harrison Marks. She soon graced the pages of countless girly magazines starting with the May 1956 edition of Carnival. She also danced topless at London’s Windmill Theatre. If you want to get an idea of the kind of photos she then shot, check out Solo #8 which was entirely dedicated to her and is now a collector's item. A number of her photos are also available through Nostalgia Publications: check for her name in their two catalogues dedicated to Glamour photos and girly mags including Just Marie Deveraux (sic), a compilation of some of her 1950s photographs. Or simply drop by the Harrison Marks website.

Between June 23 – July 05, 1958 she appeared in Tender Trap for the Queen’s Theatre in Hornchurch, her one and only drama appearance that I am aware of.

Half of her film credits are Hammer productions: She has a small part as a Harem Girl in I Only Arsked (1958). Her most memorable role (hint: THAT cleavage) was as a taunting and sadistic Oriental girl in The Stranglers of Bombay (1960). In the same year she was also one of The Brides of Dracula (1960), the more beautiful, but silent one next to Andree Melly. She spent A Weekend With Lulu (1961) and appeared in The Pirates of Blood River (1962).

Marie Devereux was Elizabeth Taylor’s stand-in for Cleopatra. Following that she could have had her best shot at mainstream fame, had Cassandra’s Iliad been made. That film – based on a screenplay by Mario Puzo - was to star Marlon Brando and to narrate the classic Homer tale from the perspective of Cassandra. And Devereux was meant to play that part. Alas, the film never got off the ground. And – after appearing in two Samuel Fuller movies (Shock Corridor, The Naked Kiss) – Devereux just did a vanishing act and was never to be seen or heard from again. Not a very uncommon fate for a Hammer Girl.
Posted by Holger Haase at 8:04 PM