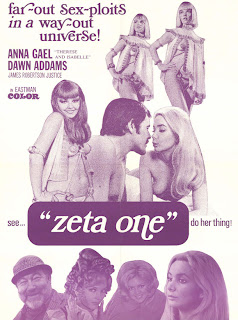 “Don’t Be Afraid/She Only Wants Love!”

Bootilicious semi-naked ladies in the title sequence and shwinging 60s musak introduce us to Zeta who is “all around you/yet not here at all” And in case we can’t spell, then the singer helps us out. It’s “Zee Eee Teee Aaaaa” and she’s “the feeling of love/from a girl so warm/but mysterious”.

That title sequence looks and sounds fab, but really doesn’t help at all when trying to figure out what the blazes is going on in this movie.

Apparently it is about Zeta (Dawn Addams) who comes from a different galaxy, surrounds herself with a colony of gorgeous babes and tries to take over our world, but in a good way or something.

A secret agent called James - no, not that one – Word (who incidentally reports to someone called W: Reverse that!) stumbles into the first scene all complete with a fake 60s tache and then spends the next 20 minutes of the film playing strip poker with Miss Olsen (Yutte Stensgaard). Now I really don’t mind spending such an inordinate amount of time ogling at this beautiful Swede in the buff, but still must admit that this hardly makes for ingenious script writing.

In actual fact it is amazing that any plot as feeble as that was chosen by Tigon who produced it to help set up a company to rival the likes of Hammer and Amicus. If it wasn’t for a bunch of actors and actresses who are generally better known for their appearances in Hammer films and Carry On style productions, it is doubtful that anyone these days would still remember the movie. What drove such a relatively eclectic cast to agree to appear in such drivel is beyond comprehension. Hard to believe any of them had ever read the script, if even there was one.

Following the strip poker sequence, Word and Olson jump into bed and Word narrates what had happened previously.

Y’see, Word (Robin Hawden) is the world’s most incompetent agent (not a spy, as he himself insists) and was ordered to investigate the disappearance of a series of gals from all over the world. Without really doing anything else but jumping into bed with any girl that crosses his path, he discovers that they were kidnapped by Zeta to be brainwashed and serve in Angvia.

Angvia is out in space somewhere, but perhaps it’s not, perhaps it’s right here in a different time scale or something. All we know is that it exists. If you think this sounds vague: Believe me, it is pretty much quoted verbatim from the dialogue.

All of that really is an excuse to see as many topless 60s girls as possible. How nice that the Angvians are generally not only dressed in the most cleverly designed topless swimsuits (courtesy of Colette Du Plessis), but they also make sure that one of their victims is a stripper (Wendy Lingham).

James Robertson Justice and Charles Hawtrey are part of a group of men who aim to capture Zeta and destroy her operation. In order to do so they’re not averse to torturing an Angvian. That violent, fetishistic torture sequence is strangely out of place in this generally more comic titillation caper. When they stage a Most Dangerous Game style (wo)manhunt, their group gets killed by the invading topless ladies, one of them being Valerie Leon. These appealing aliens have a superior power that helps them win over the men: They can shoot invisible bullets out of their fingers! Ever improvised a cowboys and Indians game as a kid with nothing but your empty hands as revolvers? Well, that’s the general idea in those ridiculous looking fight scenes. The term “budgetary restraints” must have been invented for that production.

Even the most hardened admirer of this film must admit that it is ridiculous to the extreme. It does, however, make for some titillating viewing. It’s a Must for Hammer Glamour fans: Yutte Stensgaard has her most memorable part in this film. The expression “Everything But the Nipple” (generally associated with this actress) must have originated for Valerie Leon in this film as she does display pretty much her entire body if it wasn’t for a micro bikini bottom and one of those stripper nipple protectors that display, well, everything but the nipple. Dawn Addams is the only lady who does not display her wares. The spaceship (insemination room included) makes for some fun psychedelic viewing. And, in case I haven’t said it enough, it also has Yutte Stensgaard. In the nude. A lot.

Robin Hawden, who played the stumbling and womanising secret agent, subsequently went on to bigger and better things, by, ahem, next starring in Hammer’s When Dinosaurs Ruled the Earth (1970). He also wrote a couple of books, some which can still be bought from Amazon and Amazon UK.

Look closely and you can also discover Kirsten Lindholm as one of the Angvisa girls.

Valerie looks stunning in this. Based on the short lived space age gents mag Zeta