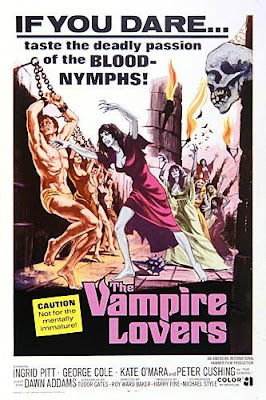 Hammer movies were always known not just for their classic (mainly) horror output, but also for their buxom beauties. From their first coloured productions onwards female eye candy was as important to their films as classically trained male actors and Gothic mood and set pieces.

Ingrid Pitt as Carmilla (or Mircalla, Marcilla or whatever else she calls herself here) is a very convincing lesbian vampire with a hint of world weary Eastern Europe ennui about her. Her strong accent has never been used better than in this production and makes you wonder why on Earth she was dubbed for her next performance as Countess Dracula. Her character is awaiting invitations into noble men’s houses, just to subsequently seduce and quench her blood lust on their daughters and housemaids (Pippa Steele, Madeline Smith, Kate O’Mara) who are all only too willing to indulge in some Sapphic tête-à-têtes. She is able to walk by day, yet prefers staying in the shadows and goes into rambling hysterics when confronted with the funeral of a girl she killed.

Peter Cushing, Ferdy Mayne and Douglas Wilmer are the vampire fighters and as such the representatives of Hammer’s stern old men club who this time round play supporting parts to the female leads. In earlier movies this constellation would have been reversed. These gentlemen are joined by a young and up and coming Jon Finch.

Also watch out for Kirsten Lindholm as the first Vampire. She would subsequently be the only actress to appear in all three Karnstein movies, though only ever in minute bit parts. Other memorable roles are played by Dawn Addams as Carmilla’s mother, The Countess, and John Forbes-Robertson as the mysterious Man in Black.

"The Vampire Lovers" is one of my favorite Hammer movies. I loved the sexy Ingrid Pitt and all the beautiful women she seduced in the film. There was a lot of gorgeous eye candy in this film. I really enjoyed it.