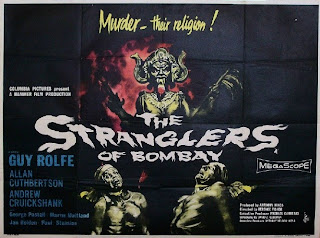 After a while spent travelling and focusing on other projects and articles for other websites and magazines, it is now time to start digging into my pile of unwatched Hammer movies, primarily the three Icons sets that I recently obtained.

Now call me shallow, but the first thing on my mind when I started watching this was: “Black and White? What the hell?”. Somehow I was expecting a story filmed in the lush colour tones of Hammer's Gothic horrors or other Adventure movies. Yes, I am aware that – although the company made their mark with colour movies – they have a large selection of black and white films in their back catalogue as well. Black and white, however, for me was always associated with their Hammer Noirs, their psychological thrillers or war movies and I generally associate their foray into adventure cinema with colour productions. I do suspect that economic reasons may have deterred them from using their usual cinematographic choice.

Still, not a biggy, as I do like black and white in general and Arthur Grant's stark contrasts make this a very enjoyable (if unusual) choice for this viewer.

Next thing on my mind was: “Ah..... Guy Rolfe” followed by memories of seeing him at one of Don Fearney's events just prior to his death. To my utter disgrace I hadn't at the time been consciously familiar with this actor, but when he strolled into the Cine Lumiere building it became obvious that we were in the presence of a man just oozing charisma. Resembling a latter day John Carradine, Rolfe's gaunt features and tall stature, even when walking on a stick, commanded a presence that resulted in a lot of the event's visitors respectfully moving aside to make way for him.

It was clear to me from then on that eventually I would just have to make myself more familiar with him, especially when I subsequently noticed that I had of course already seen him as Mr. Sardonicus and as Andre Toulon in some entries of the Puppet Master series as well as in Hammer's excellent Yesterday's Enemy.

Still, The Stranglers of Bombay had eluded me up till now. Rolfe gives a fantastic performance as Capt. Harry Lewis, an expert in Indian Affairs working for the East Indian Company who is trying to expose the realities between the mysterious disappearances of hundreds of locals and the continuous attacks on company caravans. Whereas he suspects the workings of the Thugee cult devoted to the Goddess Kali, his superiors ignore his findings and force him to research on his own.

Rolfe – tall, dark and handsome - makes for a convincing leading man not without some small personal issues. It is fun to see him constantly talking over his wife who doesn't seem to be able to get a word in edgewise no matter how much she wants to express her support.

Rolfe heads a list of actors that are second string only in relation to their overall recognition in the Hammer canon but first rate in terms of acting quality. So look out for George Pastell as a Kali High Priest and Marne Maitland as the Indian Patel behind the Cult's exploits. Allan Cuthbertson, familiar from scores of TV appearances, makes for a convincing arrogant officer who only sees the truth when faced with his own death.

Hammer's only exposure to Glamour here comes in the form of Marie Devereux in a silent role as one of the Cult's female accolytes and practically bursting out of her top.

When Hammer failed to obtain the rights to John Masters' novel The Deveivers, they simply based their script on the memoirs of Major General Sir William Sleeman who was primarily responsible for bringing the Thugees' reign of terror to an end. As such they had the veneer of a factual approach though I doubt that historical accuracy was at the top of their mind with this picture, especially given that the main character's name was not even identical with that of its historical model.

Still, though some of the scenes, as usual with Hammer, had to be cut upon its release, the censor seemed to have let them get away with quite a lot probably because of the historical pretense. As such we see scenes of men being blinded, murdered, cut and tortured while Kali's followers ecstatically look on. One sequence that you could not expect in modern movies any more features a real fight between a mongoose and a snake. Not sure whether no animals were harmed in the making of this film. Biggest WTF moment comes when one of the Cult members not only joyfully looks forward to his own hanging, but willingly jumps into the noose before the hangman has a chance to do his job.

Terence Fisher is the ideal man to head this production, combining the more gruesome elements of the story with a sense of more epic adventure. Hard to believe that all of those scenes of the Indian subcontinent were filmed in Bray's own backyard.

What is highly unusual about this film is not only its exotic set up (Thugees were rarely ever given centre stage in a movie before), but also its bleak approach to the subject matter. When Lewis gets stone walled he may ultimately be able to expose the cult, but fails to prevent a single attack and instead is faced with a freshly dug mass grave and a prime villain still at large.

Indeed if there is one thing that may drag this film down a bit, it is the rushed and rather unsatisfactory ending. A character who previously had no compunctions about killing his own brother all of a sudden shows remorse when he recognises a necklace our hero wears and helps him escape. And though the major villain of the piece then sees a heavy suspicion fall upon himself, he is far from being outed and able to continue his rule of terror for a while.... and likely for a sequal that may have been hinted at but never came to pass.

One certainly wishes that more thought could have been spared for a more conclusive finale to an otherwise interesting film.

Go see it.... in Strangloscope!

A great film, and amazing what Hammer got away with because it was in black and white. Still cut, unfortunately (mostly scenes of Marie Devereux gloating at the torture - although some of these can be seen in the trailer and in a Worlds of Hammer episode), but the BFI supposedly has a full print.

Easily the most interesting thing I've read about this film, and the first that has really fired me with a desire to see it.
Nothing to do with Marie Devereux. Honest.
Did you say this was available in a box set? Which one?

It's in the Icons of Adventure boxset. There is an Amazon link to it at the bottom of the review, but you may also want to check out DeepDiscountDVD where it was available for just $10. The Icons of Hammer Horror set was also available there for the same price when I bought it at the end of last month.