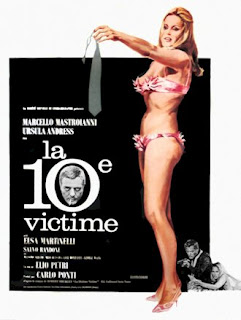 Sometime in the not too distant future, war and violence have been eradicated, but in order to satisfy the bored public’s brutal instincts a new kind of game show - very much inspired by the ancient gladiatorial matches - has been invented: Everyone can legally go out killing provided they register for the show and publicly hunt their victims. If you survive five attempts at being the prey, five further attempts at being the hunter, prize money of $1.000.00 is yours. Sounds tempting?

Ursula Andress plays Caroline Meredith, one of the game’s participants, who is just one match short of turning into a champion and winning the big prize. Her last victim was ingeniously killed via two guns hidden inside her bra. Hmm, where might Mike Myers have got his idea from for the opening scene of The Spy Who Shagged Me?

Her next victim is supposed to be Marcello Mastroianni. His character has his hair dyed blond and both of them fall in love with each other. Will they be able to cheat the system, take the money and survive the cruel match?

This film is based on the story The Seventh Victim by Robert Sheckley. He elaborated more on this subject in a further novel, The Prize of Peril, that has – sometimes officially, sometimes unofficially – also been adapted. That novel was the basis for Das Millionenspiel, a very controversial German TV production from 1970 that remained unseen for legal reasons after its initial broadcast, or the excellent French movie Le Prix du danger/ The Prize of Peril (1983) with Michel Piccoli in the role of an egotistical show master. And guess who was the real inspiration behind The Running Man (1987)? If your answer is Stephen King, you’re just going for the bleedingly obvious. And let’s not even mention Lucio Fulci’s Rome 2033 – The Fighter Centurions (1983).

The Tenth Victim is a thoroughly entertaining satire on modern game shows that is now more on the mark than ever before. It has a good number of comedic elements, none of them of the intentional kind. 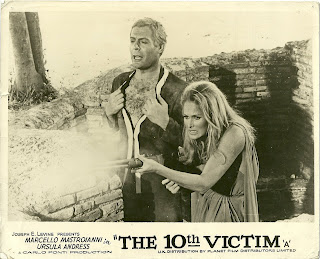 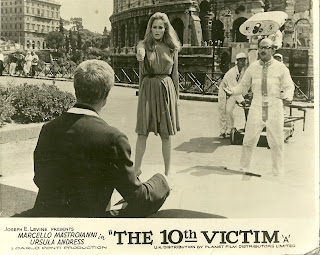 I love that movie! It is all the glorious sixties gave us from clothing to euro cult stars like Andress and Martinelli to great opening credits and above all great style on every level of society of that long gone era! Sigh!

And found a creative way to promote your blog. ;-)

Nice one. Always great to see some more Hammer writers on the Interweb. I wasn't aware of your blog before but will definitely blog it and enter it on my blogroll.