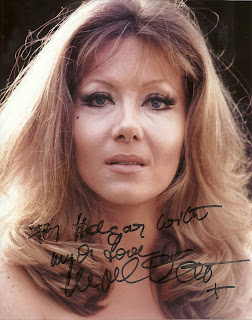 Really saddened to hear about the passing of Ingrid Pitt just two days after her 73rd birthday. I only heard about this late last night when I returned home from work and noticed how much the Internet was abuzz with news about her death in Facebook tributes, countless blog posts and numerous tweets... truly an indication how much Pitt was loved and admired by several generations of Hammer Fans.

She was one of the most prominent female Hammer Stars despite the fact that she only ever acted in two of their movies and one of which (Countess Dracula) really wasn't all that great. The other one (Vampire Lovers), however, launched a whole new wave of lesbian vampire movies and messed around with many a teenage boy's - and their father's! - hormones for years to come.

Given that Pitt's most iconic decade were the 1970s it bears reminding that during that period she only ever shot five feature films: the two Hammers as well as The Wicker Man, The House That Dripped Blood and the virtually unknown Nobody Ordered Love.

It is a sign of Pitt's resilience that out of this handful of movies she managed to create a lasting image in an active career that lasted up to her final days.

These days you're labelled a “survivor” just for making it through a bout of flu. Pitt, however, clearly had managed to beat the odds against her from an early age on when she survived the horrors of a Nazi concentration camp. She also escaped into the West by swimming through the Berlin River Spree. 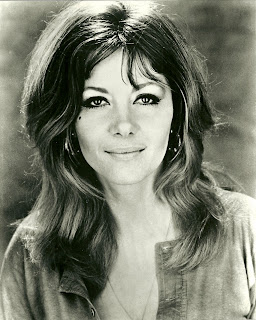 Her most prominent role in the 1960s was alongside Clint Eastwood and Richard Burton in Where Eagles Dare, though she was also an extra in Doctor Zhivago and Chimes at Midnight, battled invisible dinosaurs (to save on special effects costs) in Sound of Horror and was the unfaithful wife in super cheap jungle adventure The Omegans.

Her key roles demonstrated that she not only had a very unusual Slavic sensuality – she was never what could be called the girl next door – but also a true ability to act that was never properly acknowledged at the time and even strangely covered when her voice was dubbed for Countess Dracula. An Easter European actress playing an Easter European aristocrat with an Easter European accent apparently was too radical a concept for Hammer.

After a break of a couple of years she returned back to the screens again in a small number of supporting roles in the 1980s such as Who Dares Wins, Wild Geese II and Underworld (aka Transmutations).

Probably noticing that her cinematic heyday was likely going to be over soon and not content to exclusively appear on the convention circuit like so many other female genre stars of her time, she switched over to writing. Her debut novel, Cuckoo Run, was published in 1980 followed by a number of other fictional books. Over several years Pitt had a regular monthly column in the sadly defunct Shivers magazine. Her autobiography, Life's a Scream, is essential reading for all Pitt Fans and she also penned a number of books about various aspects of Fantastic film and literature including the delightfully titled Ingrid Pitt Book of Murder, Depravity and Torture. 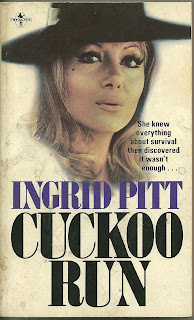 Over the last couple of years she lovingly held court over her fans during meet-ups organised by herself and her fan club, in Don Fearney's fabulous Hammer events as well as during other conventions and gradually became somewhat of an eccentric auntie who was always loving and grateful but never afraid to speak her mind.

It is my understanding that Pitt's latest (and now sadly last) book dedicated to The Hammer Xperience had only recently been finished and will hopefully soon find a publisher. Ingrid Pitt, Queen of Horror by McFarland, the first book covering her entire career, is also due out December 01.

I think I am not the only one who over the next couple of days will honour Pitt's memory by watching some of her movies and/or reading her books and silently thanking her for all the pleasure she brought us over the years. Her presence and larger-than-life personality will sorely be missed. 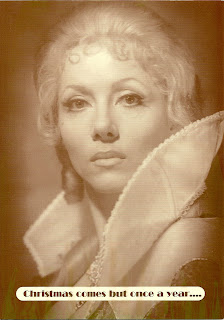 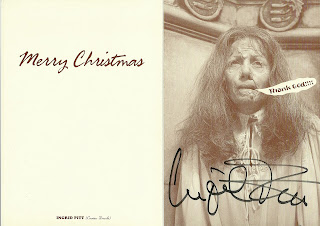 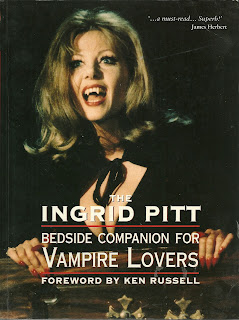 That was a great memorial post. I just saw Pitt onscreen not long ago in a low budget film called "Sea of Dust" from 2008. It's a shame that she's gone.

Great write up on a great lady Holger!

Hey, give the ladies their due - I'm sure it wasn't only teenaged boys who got a bit bothered by sexually outspoken lesbian vampires.

Haha, of course, Claire. How could I forget. My humble apologies. ;-)

The Countess will live forever...

Just wanted you to know that I enjoyed this memorial so much that I chose it as one of the best posts of November. I included in in my second "issue" of Spatter Analysis.

Thanks Jonny. Wish I didn't have to write it. I usually don't bother with obits but there's no way I could let Pitt's fly by.
Just looked at your post and there are some interesting links that I now need to explore.