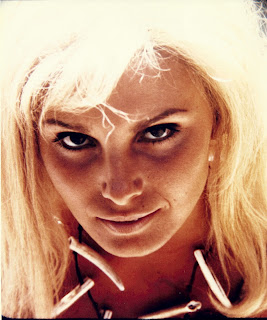 Though born Victoria Cecilia Vetry to an Italian-American family in San Francisco, for the first couple of years of her career the actress/model worked under the pseudonym Angela Dorian, reminiscent of the famous ill fated schooner “SS. Andrea Doria” until she changed her name back to her original native version following the advice of Roman Polanski with whom she had filmed Rosemary’s Baby (1968). In that movie there is a famous scene in which Mia Farrow’s character asks Angela Dorian as to whether she was the actress Victoria Vetri which she denies. That scene came straight from the book though in there the character was asked whether she was Piper Laurie. Some sources also indicate that at some stage she used the surname Rathgeb.

Prior to her supporting role in the Polanski thriller she had parts in a large number of popular TV shows of the time. He biggest career jump was when she was nominated as Playboy’s Playmate of the Month in September 1967 and subsequently became Playmate of the Year 1968. At the time she was such a popular Playmate that some practical joker in NASA even went so far as to secretly place her photo into Apollo 12’s check list. Years later Vetri reappeared for a couple of new topless photos for Playboy’s April 1984 edition.

Hammer hired her for their prehistoric romp, When Dinosaurs Ruled the Earth (1970). Some of the versions of the film show her in the nude. She also displayed a lot of flesh for Group Marriage (1973) and Invasion of the Bee Girls/Graveyard Tramps (1973). For most genre fans the the image of a blonde cave girl in the Hammer production is the way Vetri would most of all be remembered, however, she is a natural brunette who had point blank refused to get her hair dyed and instead insisted on wearing a blonde wig. 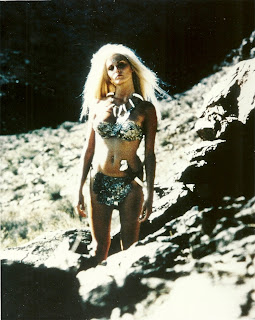 For a while it appeared as if she was going to start a promising B-movie career, however, nothing much was heard off her afterwards other than that she was reportedly suffering from a broken nose and ribs following a brutal attack in her house in 1980.

Some sources claim that she also attempted a rock music career, however, I have yet to come across any reference to recorded singles or albums under any of her pseudonyms.

She still seems to raise quite a few male hart beats: Bestseller author Dan Brown sounds like a fan given the fact that the female lead character in his Angels and Demons was called... Vittoria Vetra. Unfortunately, since October 2010 she will likely be remembered as much for her movies as for the fact that she was arrested following the alleged attempted murder of her boyfriend and is now facing possible jail time.
Posted by Holger Haase at 2:56 PM