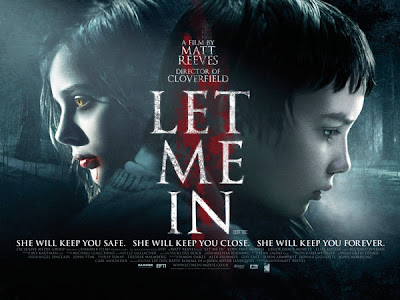 Watched Hammer's first cinematic release in more than 30 years today, Let Me In, and was pleasantly surprised how well it turned out.

You may recall that I was not a huge fan of the original. Add to that my aversion to English language remakes of foreign productions, and I initially had major misgivings about the new release.

Then something strange happened. People whose opinions I value started raving about the film when they saw it a few weeks ago in the States. And my initial disdain for the idea started to wane and I was actually ever so slightly beginning to look forward to the movie but didn't dare raise my hopes too highly.

The moment I then saw the Hammer logo on the big screen with a collage of their most iconic classic movie posters I felt a small lump in my throat.

The film itself is very similar to Let The Right One In though there are a number of important changes. Most importantly the pacing is much better in the Hammer version. There are longer, more elegiac moments but overall whereas the original seemed to entirely consist of those (often overlong shots), here we have a right mix of slow burn and occasional fast paced.

The characters are also much more believable in Let Me In and don't act as if they're all on valium. Those ludicrous scenes of depressed Swedish people sitting in a bar are gone completely and some of the scenes now are much better directed and truly haunting. There is also one particular scene showing a car accident shot from the perspective of people inside the car that is pretty amazing.

Unfortunately none of the really dark scenes of the source novel made it over - in my interview with Simon Oakes he explains why -, but overall this is a film that New Hammer can be proud of. I would have enjoyed it more if that had been completely new territory but for a remake this was quite first rate and bodes well for future new cinematic releases.

At last we can we can forget about the truly awful Beyond the Rave and instead see the true vision the new producers were having in mind.

Will Hammer ever be the kind of horror power house again with their new productions that fans will fondly remember decades later?

But they are again a major player worth looking out for. And that's fine enough for me.

I had no idea this was a hammer films production, now Im gonna try and make it to the theater this next weekend to see it! Thanks for that review, long live Hammer films!

Yes, first cinematic Hammer in more than 30 years. And first cinematic Hammer Vampire in I believe 36 years. Make sure you don't miss the first seconds of credits as there is a wonderful classic Hammer homage hidden in the new Hammer logo. I felt like rewinding to appreciate it properly.... until I noticed I was in a cinema. ;-)

I just saw "Let Me In" and I LOVED it! For me it had everything: good storytelling not the Wham Bam American style of today but slowly and with a lot of care to develop the story, great cinematography, great music score, good atmosphere and good acting! What can you ask for more! I had a real good time! Pity it didn't do better at the box office but it is a cult classic to become in the near future! Garanteed!

Glad you enjoyed it, Mirko. I was also very pleasantly surprised about this one and would also recommend the WAKE WOOD.