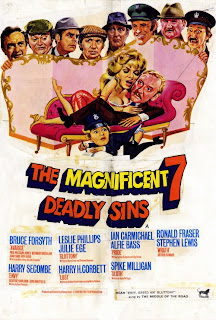 The Magnificent Seven Deadly Sins is a comedy that in the past has had its fair share of detractors. In actual fact, if you believe most reviews prior to the Region 2 DVD release from a few years ago, you may even expect this to be a complete flop. It is now, however, possible to re-evaluate it afresh and the film comes off as surprisingly imaginative and even inventive. The most fascinating aspect nowadays is that the star studded production offers a glimpse of British comedy at a time when the older “Oooh, errr!” style antics gradually became replaced by Monty Python’s new kind of imaginative comedy. Whereas all the episodes were shot by the same director, they were in fact all written by a bunch of different comedic talents and starred people from backgrounds as diverse as Goons, Carry On and Monty Python. As such it is possible to clearly watch how one style of humour started being transformed into a more contemporary one. In a way The Magnificent Seven Deadly Sins is for the history of British Humour what the Missing Link would be for Evolution. (OK, I admit I’m probably stretching credulity here a bit.)

Also of note is that the film was produced by Hammer’s smaller rival Tigon (Curse of the Crimson Altar, Scream and Scream Again).

The knee slappingly hilarious episode Gluttony features Leslie Phillips as an Executive for an international Health Food company opposite Julie Ege as the boss who invites him for dinner (and more?) up to her place. The humour of this piece is primarily based on the fact that Phillips is a gluttonous Gourmand who would love to eat anything but the company’s dry health food that he is made to consume at any given opportunity. Even when confronted with Ege’s charms, he is more tempted by her culinary promises as opposed to the other delights she's offering up. Penthouse Magazine publisher Bob Guccione also has a bit part in this episode showing him during a photo shoot with Penthouse Pet Tina McDowell. Monty Python’s very own Graham Chapman penned this script together with Barry Cryer and was also responsible for the Wrath episode.

Though Ege’s Gluttony is the funniest, the subsequent Lust is the best overall episode of the movie. Yes, seeing pervy Harry Corbett travelling around London and getting kicks out of watching Swinging Chicks of the early 70s is a lot of fun, but Marty Feldman’s script manages to land a vicious punch at the end that’ll have you not only feel sorry for Corbett’s character but also depressed about the general state of the Human Condition. Anouska Hempel has a small part as a Blonde Girl that Corbett tries to chat up.

The episode with the third Hammer Girl, Madeline Smith, in this film – Sloth – is easily the worst and unfunniest, but also blissfully the shortest. Scripted by Spike Milligan, he is up to his usual nonsensical escapades. I know the notion of nonsense implies that it’ll make utterly - well - no sense to anyone, so if you’re into that kind of humour you may see your appreciation of it shoot up. It’s all about people who can’t be bothered: Marty Feldman bounces against a tree rather than walk around it; Madeline Smith plays the unsatisfied wife of a guy who is too lazy to, ahem, make an effort; Milligan himself is a tramp who prefers to starve than to raise his arm and reach for an apple. There’s also an ongoing walnut joke. (Don’t ask: I told you it made no sense.) It’s shot in sepia toned, rapidly cut silent movie style. All the dozen or so comedians in it, including Smith, appear for all but a few seconds. Blink and you’ll miss them. And you just may be better off without it. If the only reason you were going to watch the movie was for Maddy Smith, then learn from the characters in this episode and don’t bother... unless you really need to watch absolutely everything she ever appeared in.

The remaining four episodes do not feature any Hammer Glamour, but are still chokablock with British Comic Talent such as Bruce Forsyth, Bernard Bresslaw, Joan Sims (Avarice), Harry Secombe, Geoffrey Bayldon (Envy), Ian Carmichael, Alfie Bass (Pride), Ronald Fraser and Arthur Howard (Wrath). Pretty much all of them are entertaining and tightly scripted enough as not to overstay their welcome. Pride’s tale of class snobbery on the motorways is the one of the remaining that’ll stick out the most with regards to the execution of general premise.

It is good to see The Magnificent Seven Deadly Sins popping up in a budget DVD release here in Region 2 land. It’s a half forgotten film well worth checking out. Quite clearly not a hidden pearl as such, but much better than you have previously been made to believe. Time to judge for yourself if you have so far only heard about it. [Wow, this reviews brings me back a few years. The film has now been on the market for the best part of a decade.]