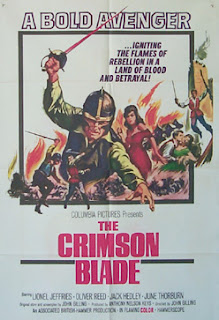 Following the success of Pirates of Blood River (1962), director John Gilling was asked to again helm Hammer’s next swashbuckling adventure The Scarlet Blade.

Jack Hedley as Robin Hood, sorry: The Scarlet Blade, has to go undercover and battle for his king against his opponents. Though set during the English Civil War there really is very little that differentiates The Scarlet Blade from the more traditional Robin Hood fare. It has all the typical elements of undercover war fare in the forest, friends being lost and rescued, scheming baddies, chivalric heroes and ladies who can’t help but fall for the outlaw. Nothing we haven’t seen done much better before.

The film is sorely lacking in big name actors. Oliver Reed is the one charismatic actor in the production and pretty much carries the movie with his moody looks and mellifluous voice. His character, Capt. Tom Sylvester, becomes traitor against Cromwell out of love for his Colonel’s (Lionel Jeffries) daughter (June Thorburn) who has turned against her father to support the king. When he discovers that his love interest has herself fallen for The Scarlet Blade the pendulum swings back and he again betrays the royal supporters. When his treachery gets discovered he outs the Colonel’s daughter as one of the main key figures in the fight against Cromwell and ends up being shot by her protective father. 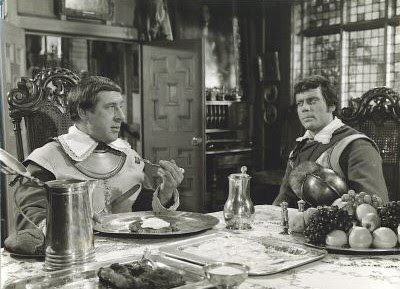 It is hard not to root for his egotistic cause at times as he is clearly used and his emotions are being played with by the nominal heroes of the movie. It is these moral dilemmas that on the one hand distinguish The Scarlet Blade from similar productions, on the other hand make it such an utter disappointment: We see a daughter turn against her father and use a lovesick soldier for her cause; a father trying to protect her daughter from becoming a victim of the very same system he supports; a jilted lover twice turning traitor and finally ending up being pretty much the only one of the main cast who ends up dead, yet he’s the one who’s the least of all interested in any one side.

This moral ambivalence is carried through right to the end of the very short running time, though rather than making this an exercise in ethical dilemma, the overall ending just comes across as an anti-climactic let down. After barely 80 minutes – at a time when the viewer could usually expect some kind of show down between the opposing parties – we see The Scarlet Blade and the Colonel’s daughter escaping from Cromwell’s troops and finding refuge in a gypsy camp run by Michael Ripper in quite possibly his worst make up job ever. The Colonel searches through the camp. Now will he or will he not discover daughter and lover there? Will The Scarlet Blade be captured and battle him to the death? Will we see a fight scene that will be imitated by all the teenage boys on their way out of the cinema?

He discovers both of the fugitives, then turns to Michael Ripper and advises him to make sure his gypsies remain in the forest. As he rides off the credits announce that we have just seen a “Hammer Production”. 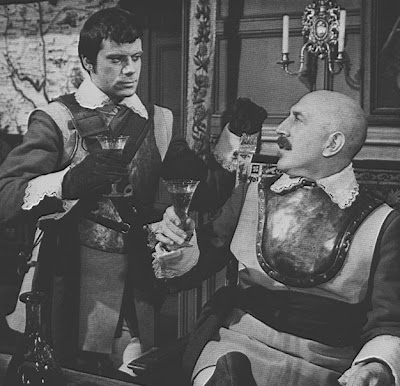 This denouement is by far Hammer’s worst ending ever. Forget about Dracula removing his stake or seeing the devil in To the Devil… A Daughter being killed off by a simple stone. The Scarlet Blade will have you look at your neighbour in sheer disbelief with a quiet look of “What the….” on your face.

Jack Hedley is a very competent actor, but not the first person you’d have in mind for a swashbuckling debonair role. He is generally better suited for authoritative, grumpy old man parts as in Lucio Fulci’s New York Ripper (1982).

For June Thorburn this would prove to be her second last movie. A promising career that had previously included Peter Cushing’s Fury at Smuggler’s Bay (also directed by John Gilling) was cut short when she died heavily pregnant in a plane accident.

The film is Suzan Farmer’s debut Hammer production. She has very little to do in her small part as Hedley’s sister Constance Beverley, a few lines and a terrified scream when she is led away by Cromwell’s troups.

John Gilling would soon direct his most famous movies, Hammer’s Cornish Horror duo The Reptile (1966) and Plague of the Zombies (1966).

I recall watching this one, but I remember nothing about it, which probably validates your review pretty well. I think I saw it under the title "Crimson Blade."

Am I right that despite the colorful nom de plume he's not one of the costumed swashbucklers like the Scarecrow, Zorro et al?

No, he's not a costumed swashbuckler. At least I don't think he is. See, I wrote that review a few years ago and have now just transferred it over from the other site. And guess what: I can't remember much of the film either. ;-)

I simply love your blog. Would you mind if I post a link to it on mine? cinemaraiders.blogspot.com

I would looovvve if you could post a link to my blog from yours. I just went over to it, loved it, added a subscription to my Google Reader and also added it from my side in my own blog roll.

Keep up the good work!