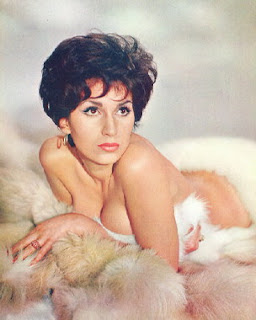 Despite her exotic looks and French name, Yvonne Romain is a born and bred Londoner. Her parents are of Maltese and British decent and her maiden name was Yvonne Warren. She took the stage name Romain after the family name of her grandmother and great-grandmother.

Educated in St Mary’s Abbey, her mother sent her to the Italia Conti acting school at an early age and from the age of 12 on she appeared in children’s television shows and repertory. Unfortunately nothing more in depth is currently known about any of these childhood performances.

Her measures at the height of her success were a stunning 38-22-36. Just what Hammer generally looked for in their female stars: She first played Oliver Reed’s mother in Curse of the Werewolf, then became his fiancée in Captain Clegg, before sharing her third and final screen appearance with him in his (and her!) last Hammer outing The Brigand of Kandahar.

Other memorable roles include: Action of the Tiger with a young Sean Connery. She also starred with him again in The Frightened City, the year before he made it big as 007. Corridors of Blood unites her with screen legend Boris Karloff. She gets fed to the lions in the excellent Circus of Horrors. One of her final British roles was in Lindsay Shonteff’s shlock classic and ventriloquist horror movie Devil Doll.

She fell in love with and married composer Leslie Bricusse (Goldfinger, You Only Twice as well as the excellent Sherlock Holmes – The Musical) and subsequently moved to L.A. At that time she had to turn down a seven year contract with Fellini as that would have meant spending all the time in Rome away from her Hollywood based husband and little son. Once based in the US, she gradually moved away from the film business. Her last two roles in the 60s were in the groovy The Swinger opposite Ann Margret and she became one of Elvis’ film gals for Double Trouble. She then practically retired and only returned to the screen briefly for the excellent murder mystery The Last of Sheila: She’s Sheila, which means she is dead and an all star cast of familiar 1970s faces is attempting to solve the Whodunnit as to who killed her off.

Still stunning looking at over 70 she occasionally shows up at Fan Get-Togethers like Wayne Kinsey’s first book launch.

Sexy and sultry, she may not have made a huge number of screen appearances, but is fondly remembered by male Hammer Fans the world over. 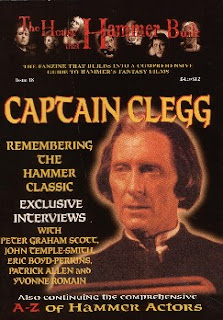 If you're interested in reading more about her, check out Yvonne Romain's by far lengthiest interview (to my knowledge) in The House That Hammer Built #18, p. 99-102. This is Wayne Kinsey’s special Captain Clegg issue, so it is only fitting that he manages to extract a lot of valuable info from her for this one. 90% of the biographical info I have published for this blog post came courtesy of this single interview!
Posted by Holger Haase at 12:42 PM

Yvonne Romain is the most beautiful woman in the world.